Hope you have a great one, I know we will!
Just wanted to share another of those milestones that we're squashing.
On Thursday Fiona went for a real bike ride.
When I say real I mean not just in the yard but 6 whole blocks and back!
Here's a little video for you.
Posted by Cheryl West-Hicks at 11:49 AM 3 comments:

"He Check My Teef"

Today was a big day for Fiona.
It was her first visit to the dentist and she did so well.
I have reluctantly decided to leave the office I was going to close to my parents' in favour of something minutes away.
We met our new dentist today and he was great.
Fiona warmed right up to him and all the staff. 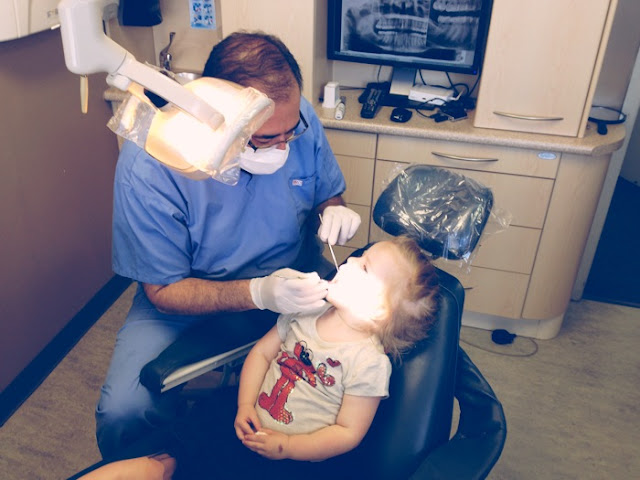 As a child I never understood why the dentist was dreaded.
You got to miss school and got a prize, always seemed like an all-round win to me.
I usually went for one of those "gemstone" rings, remember those?
They still have them though Fiona picked something a little more her style. 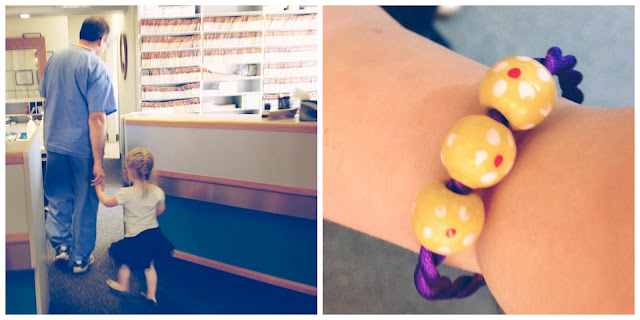 Just crushing milestones like nobody's business over here.
Sometimes I still turn to look at her and expect a baby but I see this big girl in front of me. 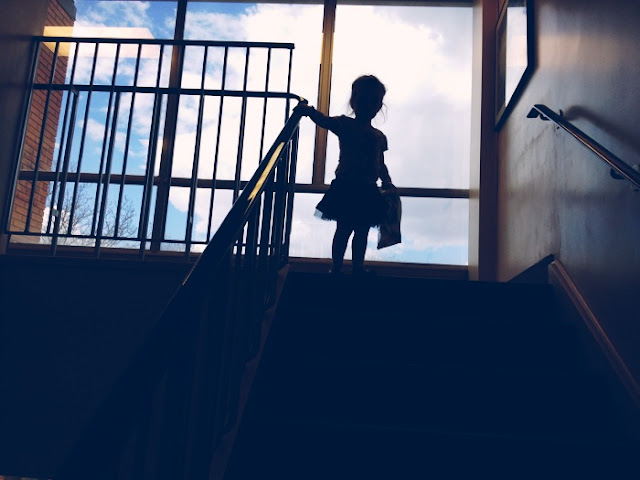 I don't know if the image I have in my mind will ever catch up to the reality.
Posted by Cheryl West-Hicks at 4:25 PM 2 comments:

Mo' Money Mo' Problems {this title's for you Jules}

It's been a while since I've felt frustrated.
Family life is good.
Business is good, still growing
All is good.
But yesterday we I got a call from our bank.
Now it's time to get real.
They haven't adjusted our accounts since we first opened them.
We are operating with the same accounts that we were when our sales and receivables were a tenth of what they are now.
The message I was given was that they still wouldn't be changed.
And this from a bank that advertises their commitment to "helping you grow your business"? 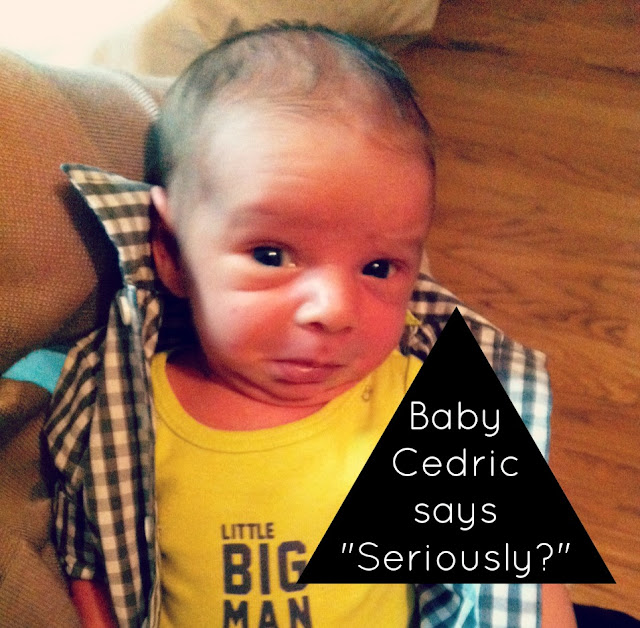 We were told a year ago that our requests were a done deal.
They weren't.
Then we were told that once our new books were in and we showed our growth it wouldn't be a problem.
It was still a problem.
Recently we have had a couple of people working on our application and were given hope.
To no avail.
I am frustrated.
Frustrated that in order for us to grow we have to juggle our funds.
Frustrated that we may have to look at more expensive and less practical financing options to continue this rate of growth.
Frustrated that the account manager had the gall to comment on our "large" salaries taking away from our bottom line.
I guess she doesn't realize that we've just started taking these well deserved and not at all large salaries.

Nobody says business is simple.
And as I've said in the past, if we're going to have a problem I'm glad it's not a lack of sales.
I just didn't think we would ever have a problem convincing the bank to let us pay them interest.

I haven't bored you with money ramblings in a while.
About time right?
I promise I won't make it a habit.

Email ThisBlogThis!Share to TwitterShare to FacebookShare to Pinterest
Labels: business

Were my exact words yesterday.
I couldn't have imagined a better way to spend it.
We started out with the Mother's Day Run and Walk at Foote Field. 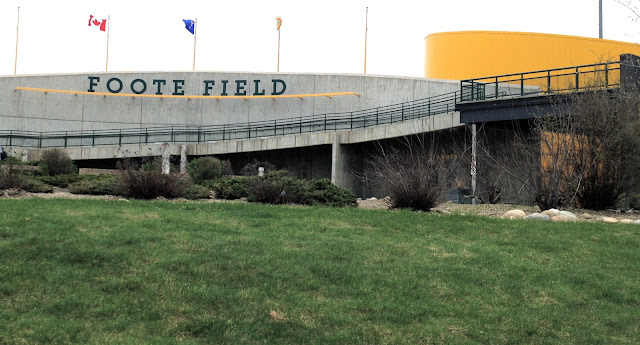 Not only were we joined by team Track and Shield {no picture opportunity this time, sorry}, we were also surrounded by friends and family.
Jeff walked with our Moms, the kids, Auntie Brie and Uncle Tim and my Dad dragged me along ran with me. 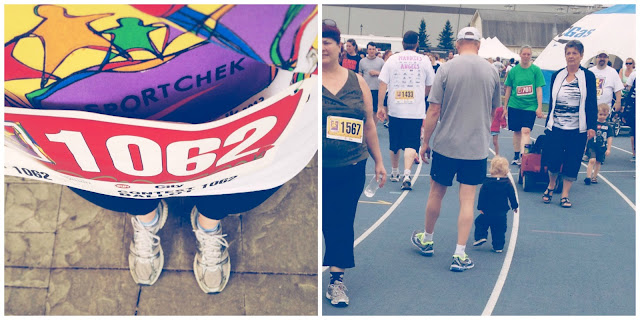 Cecile brought her Mom and sister and Jay and Chloe's kids made it a real family gathering.
We didn't make the little legs race so Fiona and I did our own. 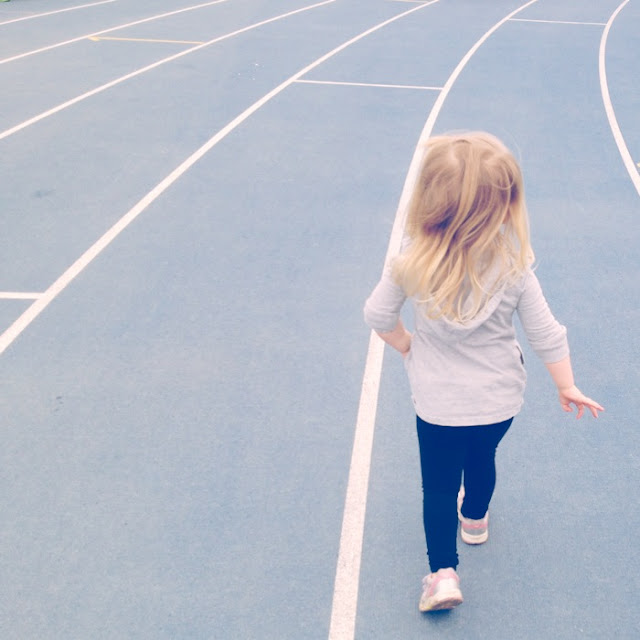 In lieu of the traditional brunch we brought along a picnic and put our blankets under a tree outside the field. 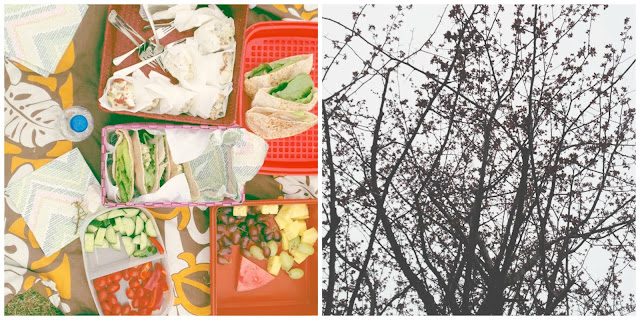 There was a little space for running and kicking the soccer ball around. 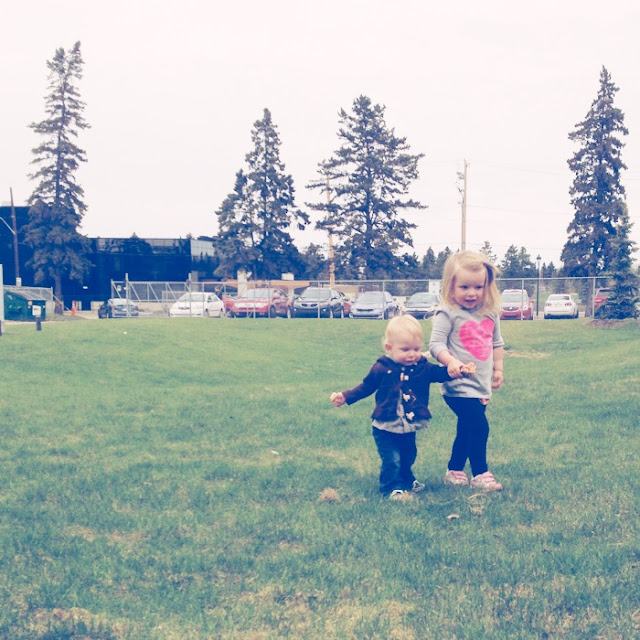 And even a small hill perfect for toddler rolling. 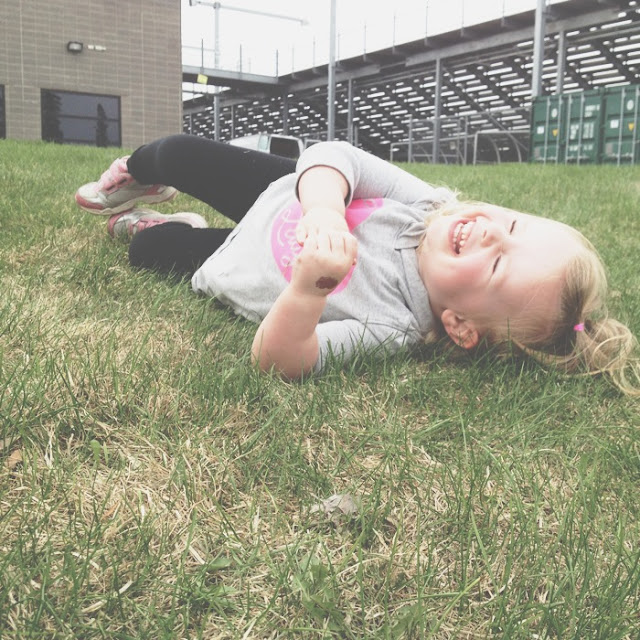 Remember when rolling down a hill made you this happy?
Maybe it still would, I mean how often do we even try this anymore?
All I know is that this day gave me this much joy.
Becoming a Mom has been amazing and beautiful, indescribably so.
But the real fun has only just begun.
I love finding these little traditions that will carry on for years to come.
Providing the other Moms are on board that is, we couldn't celebrate without you. 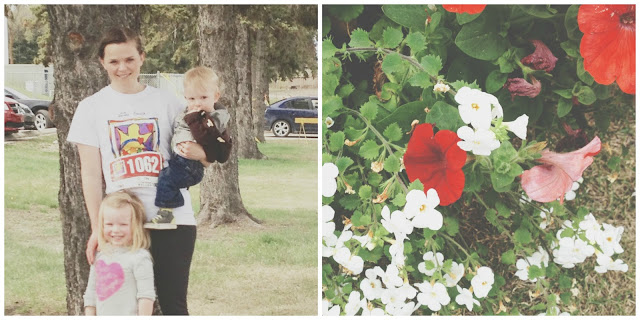 Finally, thank you Heather for being the best Mother-in-law a girl could ask for.
Mom, you wrote yesterday that I am an amazing mother.
Thank you, that means the world.
I just hope you realize that's all on you.
Love you.
Posted by Cheryl West-Hicks at 1:44 PM 5 comments:

This tuesday night had it all.
The shadows were long and the temperature was short worthy.
Fiona sported orange and the number 17 {also her birthday}.
After deciding it was ok that she didn't have green like her friend Ben that is.
The saving grace was that Rebecca donned the same colour. 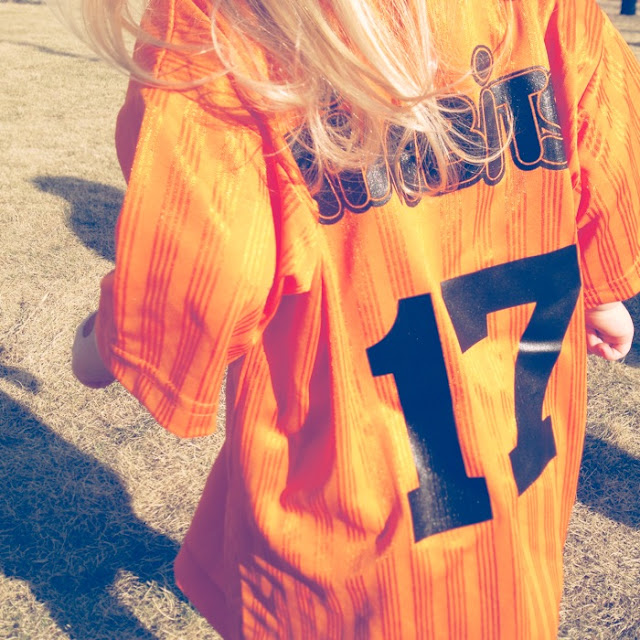 Little pop-up orange nets were mistaken for tents and many of the kids may have done this. 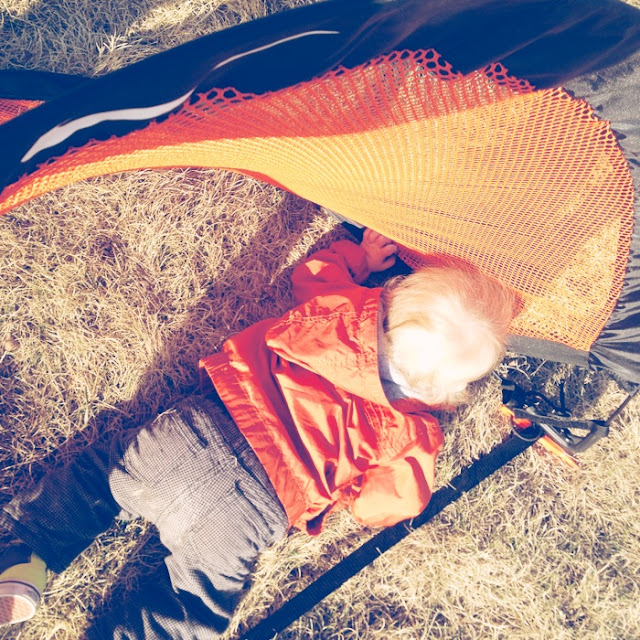 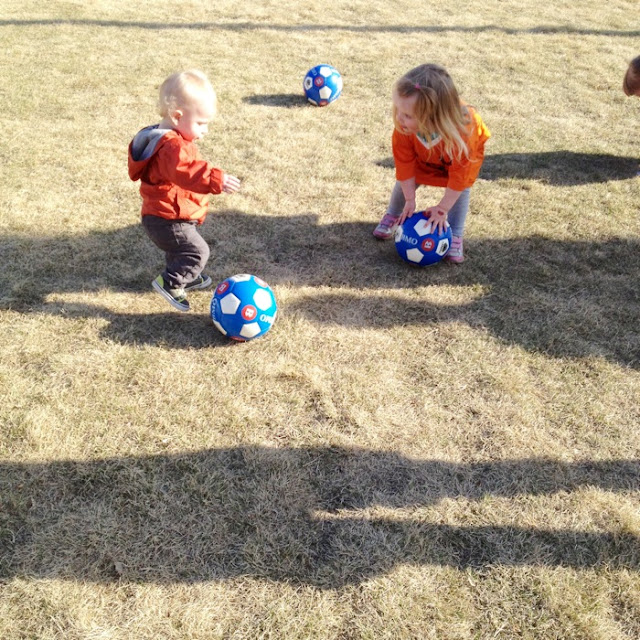 Fiona's team eventually decided that these were in fact eggs and they the mother hens to hatch them.
Someone very wise decided to repurpose the community hockey rink to contain these U4s.
At first, this Mama took a spot on the bench but quickly realized that this was a family affair and got back on the field. 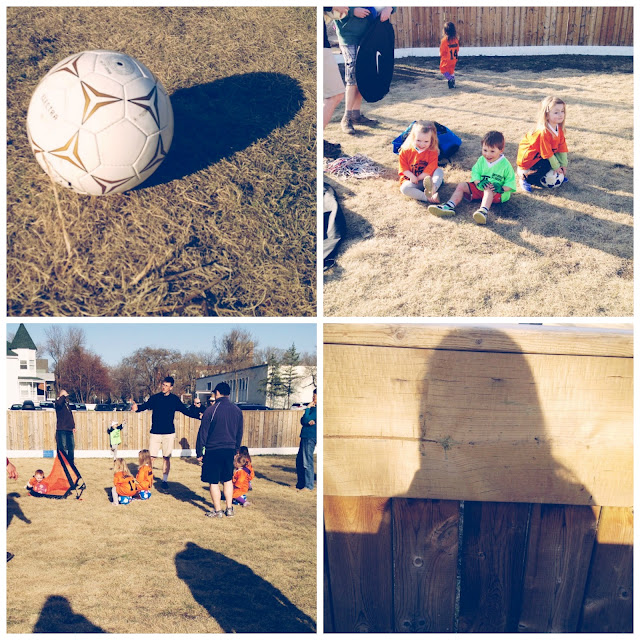 A pile of crunchy leaves in the corner served as a major distraction.
It's discovery temporarily halted any soccer like activity.
Luckily, the Saints coaches were able to refocus their players to finish out the night. 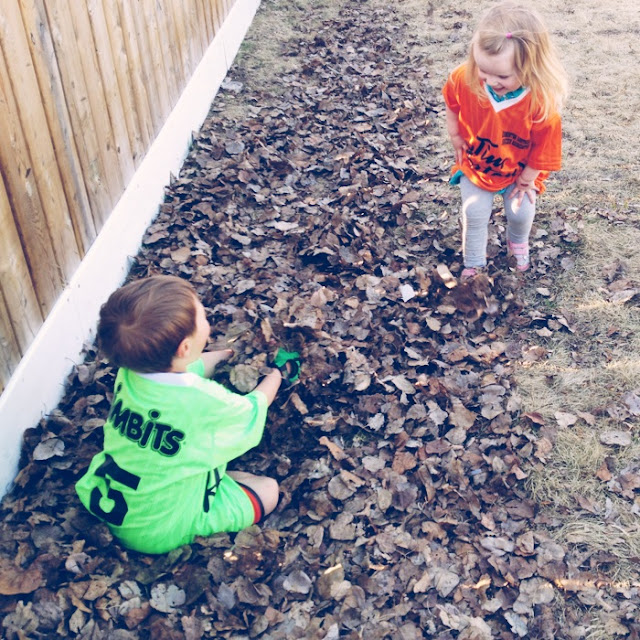 We were only missing 2 things.
Charlie.
Orange wedges.
Posted by Cheryl West-Hicks at 5:48 PM 1 comment:

A Good Start to Cabin Season

I hope you had a great weekend.
We had a busy one but were still able to pop out to the cabin to drop off some wood and survey the warm weather needs out there.
We arrived to the most beautiful surprise... 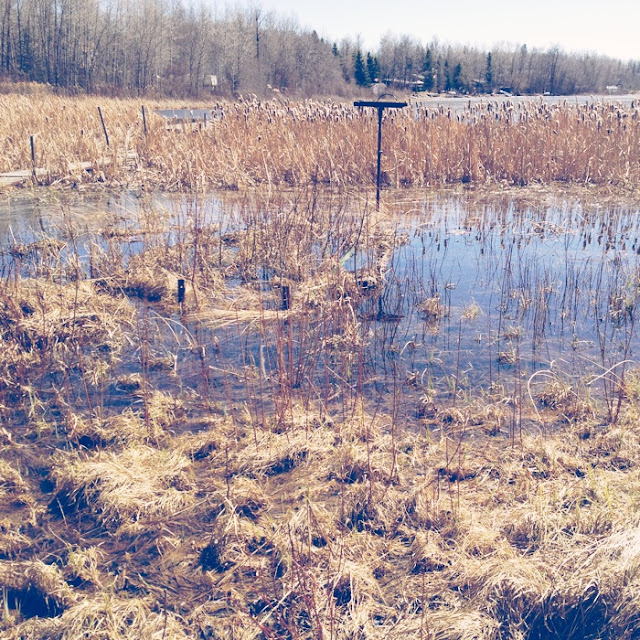 Ok, I'll admit, this does not look beautiful.
But if you have property on a lake in Alberta you may have been watching your lake front retreat.
This year though, the lake is up, way up.
All of this brush was dry last year and that thing sticking out of the water is a piece of dock that we were storing on dry land.
We're excited!
We repeatedly went and stood at the edge of the water. 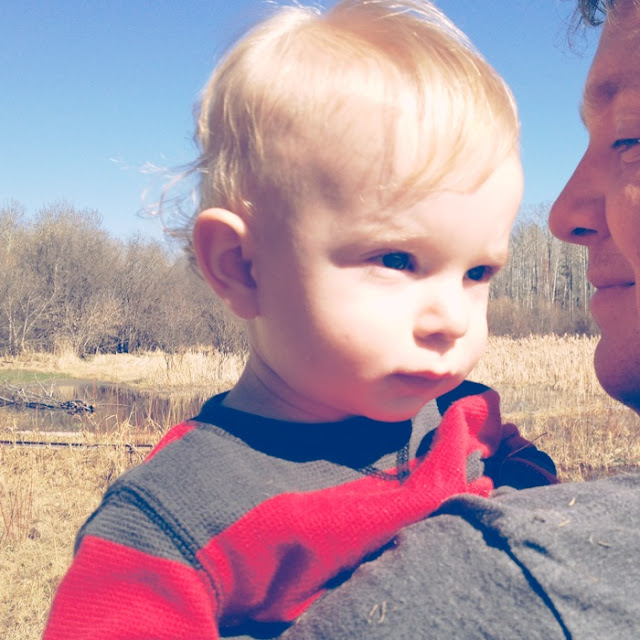 Finally Fiona decided we needed to get closer to the wildlife we were pointing out.
This is one of those things I probably wouldn't have done on my own.
Kids are great for encouraging a little more adventure.
So we stood on the water-logged grass and watched the snails and frog drift by us. 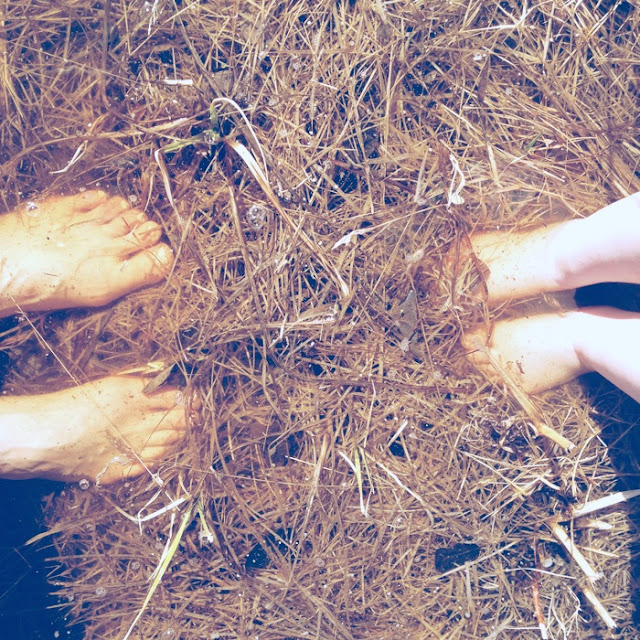 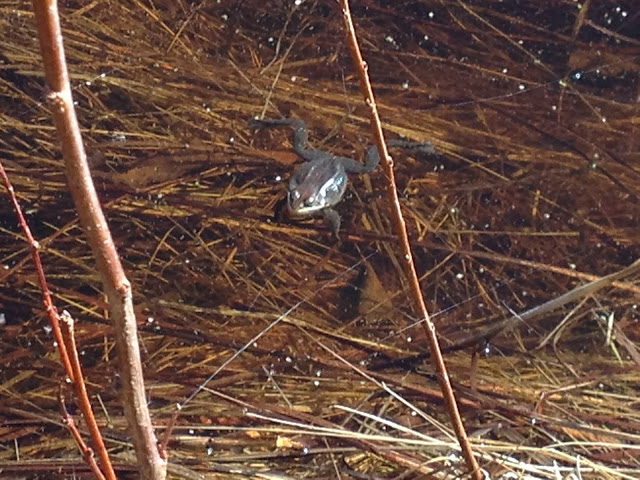 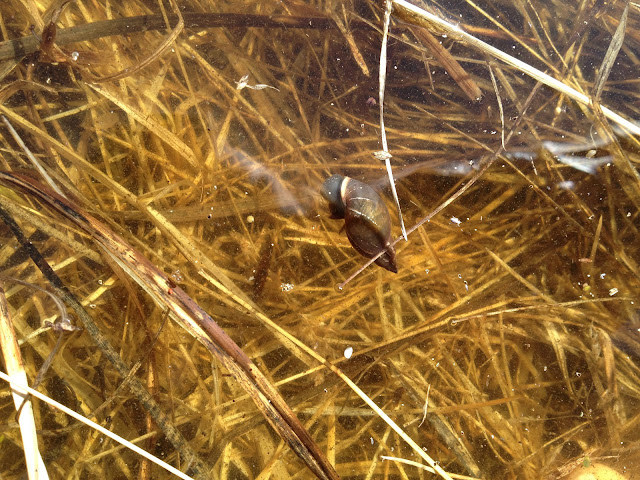 I can't wait for more adventures with this little chicken this summer. 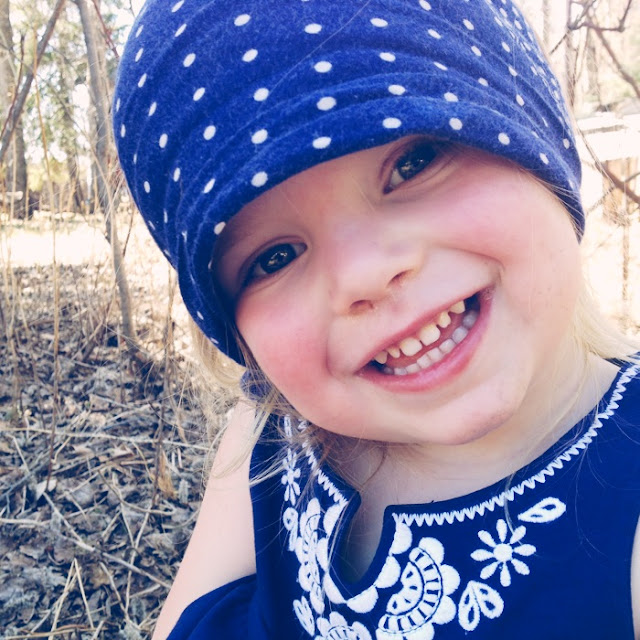 And just to give you the full experience, here's a short clip of our soundtrack for the weekend.
Jeff said that these are the sounds of mating frogs.
I don't know if that's true but if it is then I guess this is NSFW.
Posted by Cheryl West-Hicks at 8:19 PM 1 comment: 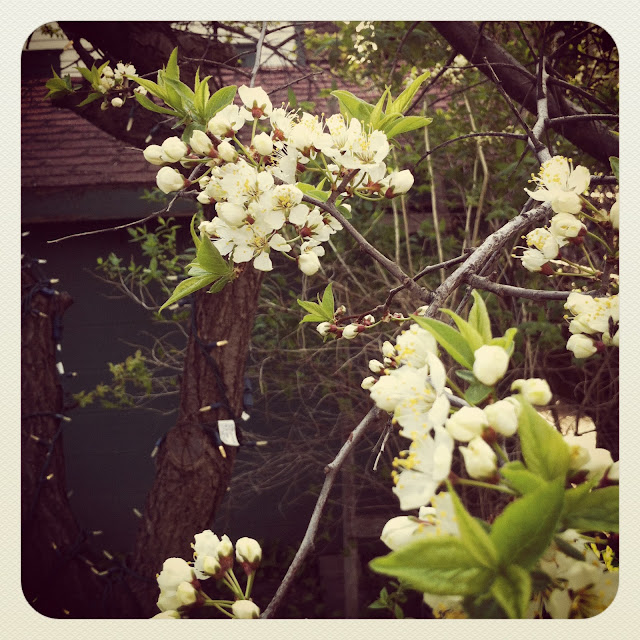 I know you've been waiting on the edge of your seats right?
You've been asking yourself, "when WILL their next race be?".
Well the wait is over, no more sleepless nights.
We are registered for the Mother's Day Run and Walk on May 12th.
This one is going to be a true family affair.
Not only are the kids tagging along but we've roped our own {and our employees'} mothers, fathers and sisters into the event.
I'm especially pumped for the Little Legs Race near the end of the morning.
This is a dash for the 2-6 year olds that I'm hoping Fiona will participate in.
{She's hit and miss on her comfort level, toddlers right?}
If you were thinking of doing this race anyways, or you're so inspired by this post you can't bear to miss it but haven't signed up yet, we would love to add more members to team "Track and Shield".
Forget the traditional flowers and cards for Mother's Day, get Mom a fun-filled morning of fitness.
Just drop me a line for our team password and we'll see you and your Mom there.

I feel like I can't say often enough how great our families are.
We both grew up with much of our extended family in another province.
So for our babes to have two sets of grandparents, 4 aunts, 1 uncle and even a great-uncle close by is a dream.
It also means that Jeff and I get the occasional night to ourselves.
Last Saturday night we had just that.
The kids were off to my parents {thanks Mom and Dad} and we had a date night.
If any of you parents out there are all "date night, what's a date night?" as we were until recently you're gonna want to have one of these.
Jeff and I sat next to each other, chatted without interruption, held hands and strolled leisurely.
No joke, there was leisure.

We finally made it to Noorish for dinner. 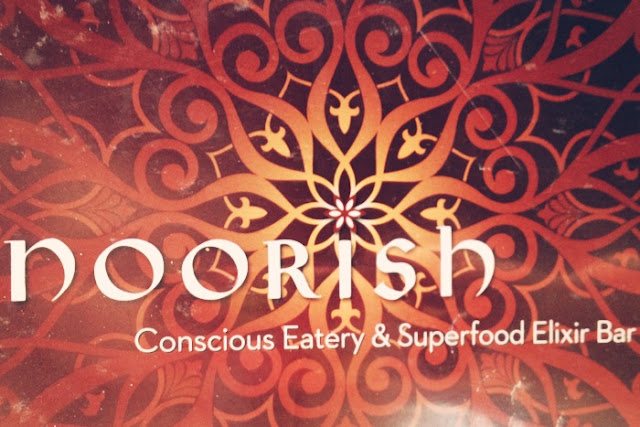 We have been meaning to go since Uncle Will gave us a gift card for Christmas.
And this place is amazing.
Completely vegetarian with many vegan and gluten free options.
The majority of their ingredients are also organic and locally sourced.
The menu opened our eyes to many combinations and food prep that we weren't aware of.
Have you seen Baby Mama?
It felt at first like we were in that restaurant with the "yeast ball for the table".
Then the food came and blew us away.
We had onion rings to start, a coconut curry and their award winning Bohdi Tree Burger.
It was all delicious and so satisfying that Jeff had to bring half of the curry home. 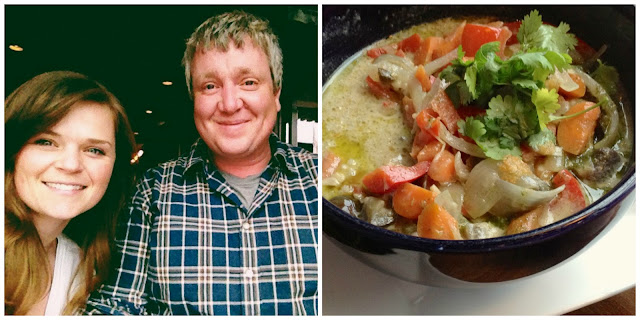 After dinner we headed down the street to the Movie Studio.
Also not a joke, there is still a movie rental store kickin' in Edmonton.
After a quick search it looks like there may even be a couple more.
This was a truly nostalgic experience for us.
Remember when video stores were huge?
It wasn't even that long ago.
When we moved into our neighbourhood in 2007 there was the cutest little independent video store tucked into a local block of shops.
Once the big guys took the late fees away, she was done for.
It wasn't long before those big guys followed suit though.
Jeff and I have always loved browsing the aisles for movies.
We were two of the 15 people who were devastated when Rogers and Blockbuster shut their doors.
We had assumed that they were all gone so you can imagine our excitement when we noticed this little gem was still alive.

They even dish out free popcorn.
The night was amazing but that free popcorn really took it to the next level.
Posted by Cheryl West-Hicks at 10:08 PM 1 comment: