...Christmas!
I have a weekend trip to Toronto to share but that task seems a little daunting for a Sunday night.
Instead I am posting some pictures of the weekend.
We started it off right with a Friday night swim with our youngest friend Olivia.

Saturday began with Fiona's ballet dress rehearsal.
Her third dance recital is taking place next week and they are cute cute cute. 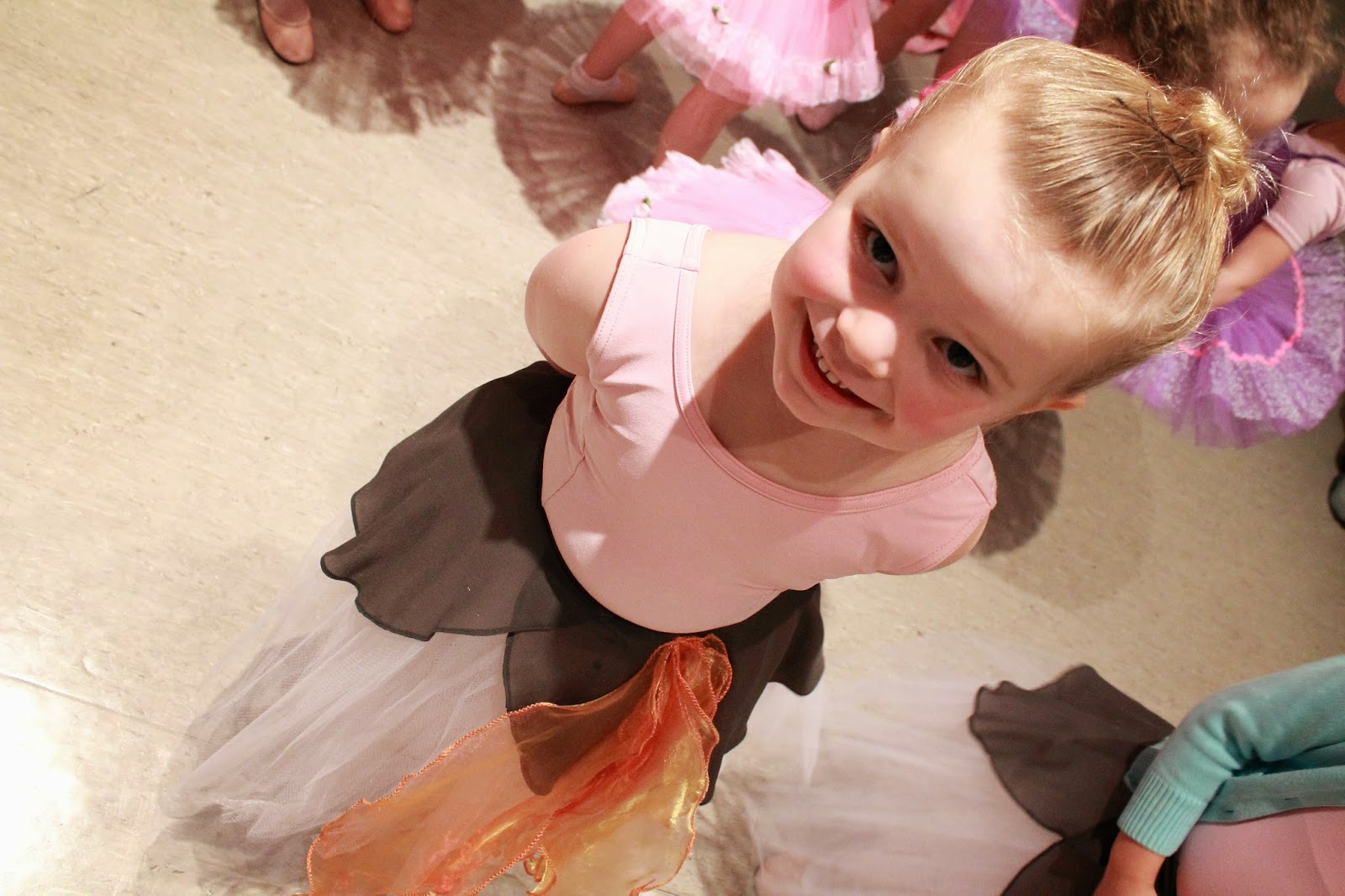 In the afternoon we took in the Festival of Frozen Trees with our besties.
{There may have been a few Elsa, Anna and Olafs.} 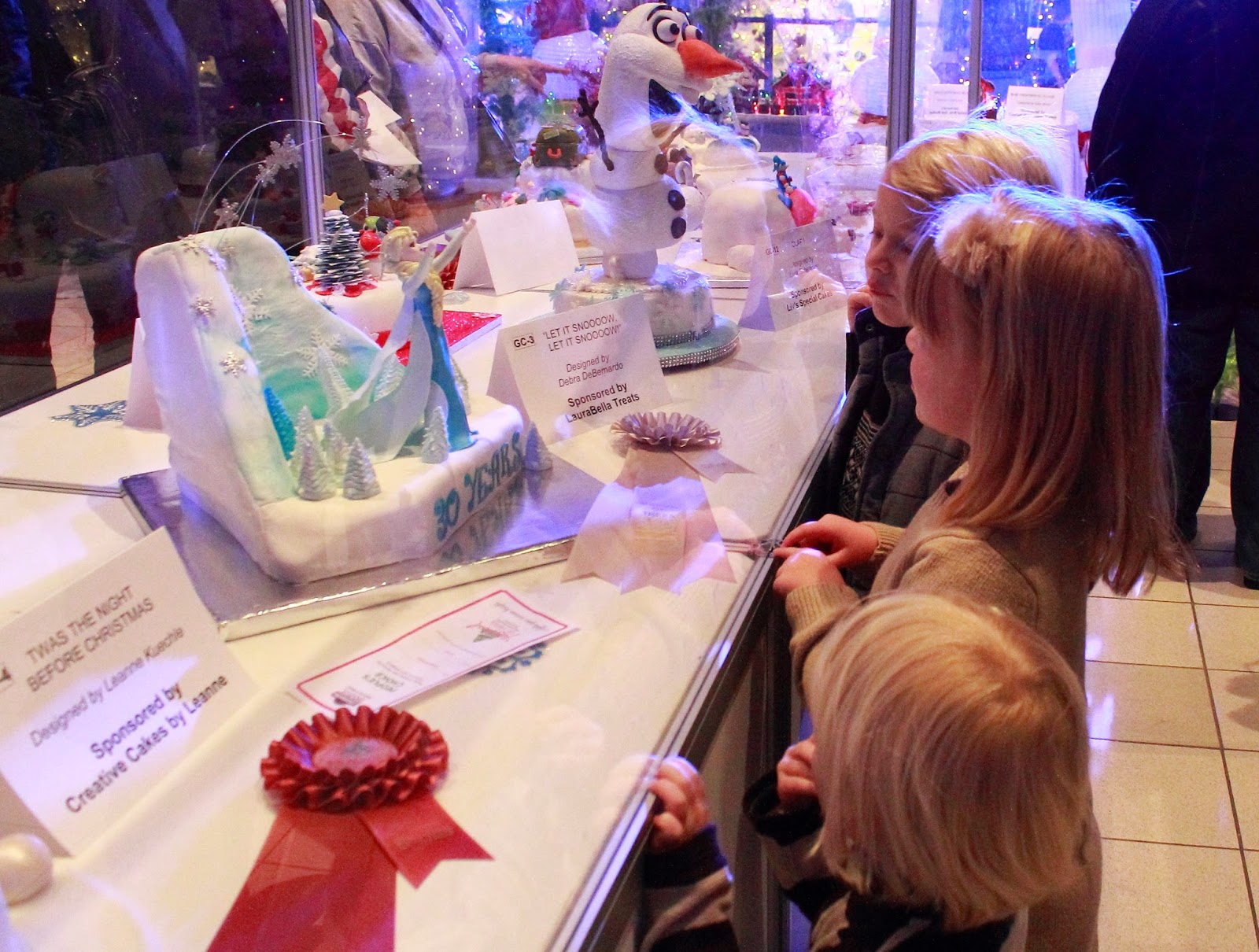 The new story corner was a welcome addition. 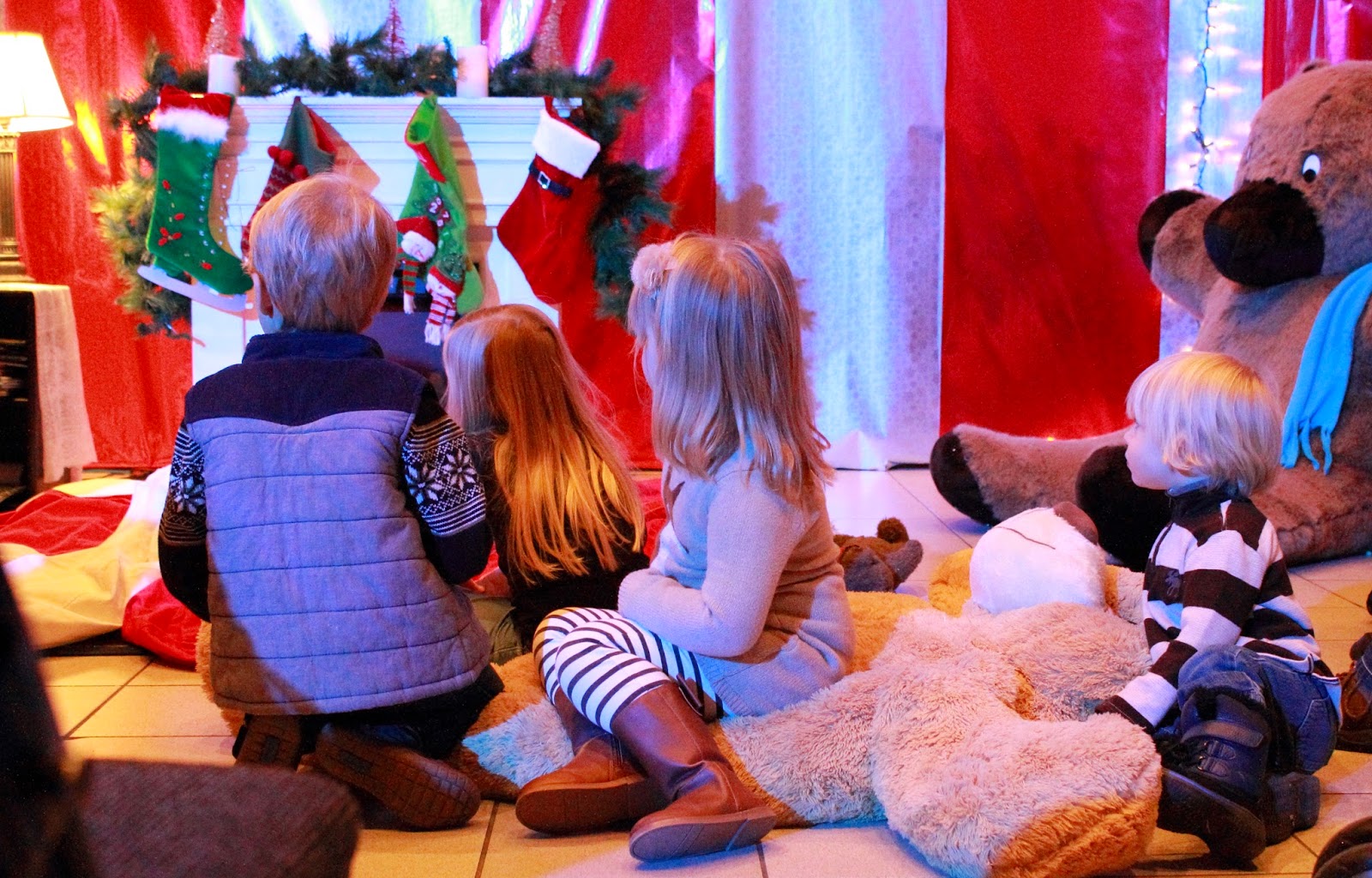 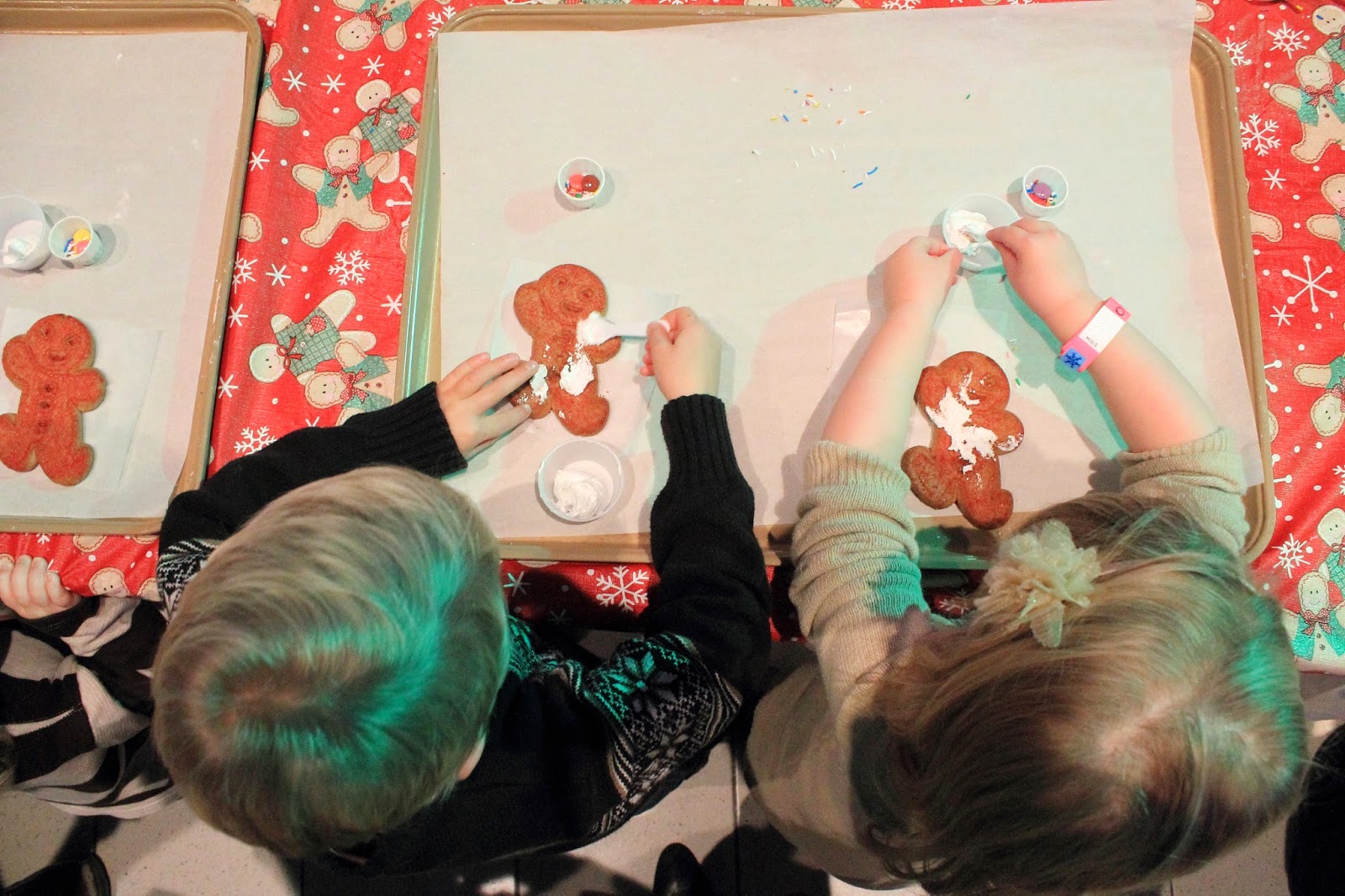 Cedric needed a little decorating help but had no problem completing the eating portion solo. 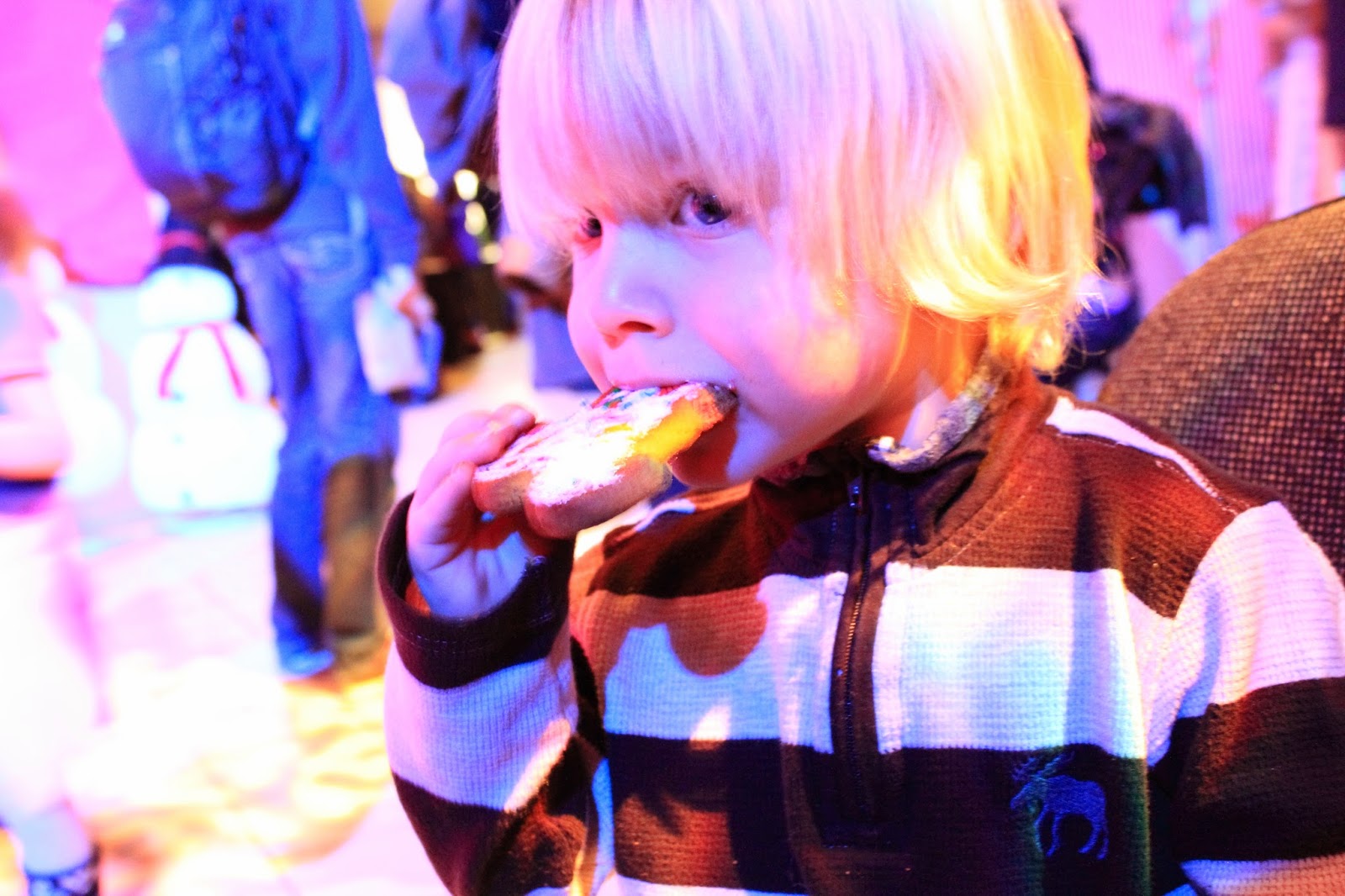 We took in what we could of the decorations while running between children events. 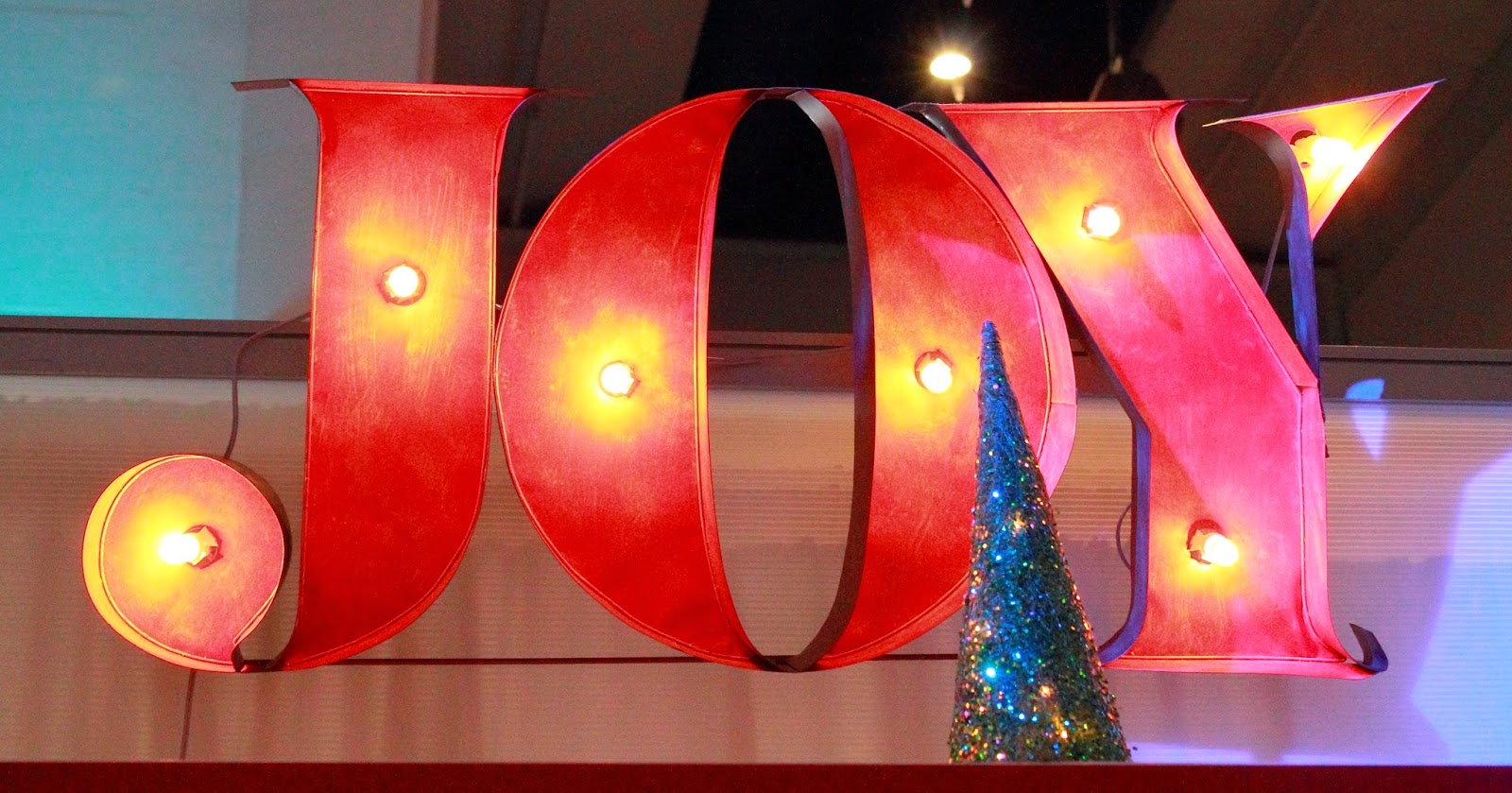 This was our first year sending Fiona in to the "secret kids only shopping".
In the whirlwind of figuring out how much money she needed and accidentally letting Cedric slip in behind her we failed to explain that this was her chance to buy Christmas gifts for others.
That's ok I thought, there are elf helpers in there, they'll explain it to her.
When she came out with that cheeky smile on her face, however, I just knew she had found some treasures for her own collection.
I know her so well.
In that moment I felt a mixture of emotions.
She was so happy and excited so I wanted to share that with her.
At the same time I felt like I had failed her.
I hadn't equipped her properly, not only for that shopping spree but for life.
Had I created a materialistic, selfish child?
Hadn't we discussed at length what the true spirit of Christmas was?
I expressed this to Jeff on our way to dinner.  He didn't disagree but kept fairly quiet.
After a lovely dinner my sweet child, who had behaved so well in the restaurant, said out of the blue "Mommy, I just love you."
I wanted to cry that I had doubted for even a split second the character of this wonderful little person.
I had forgotten that she is 4.
{Four and a HALF she would say.}
I leaned to Jeff and said that I thought I had been too harsh in my initial reaction.
He said "no, not at all" of course {smart guy} but chuckled a little and I knew that he knew that I knew he had known that all along {smart guy}. 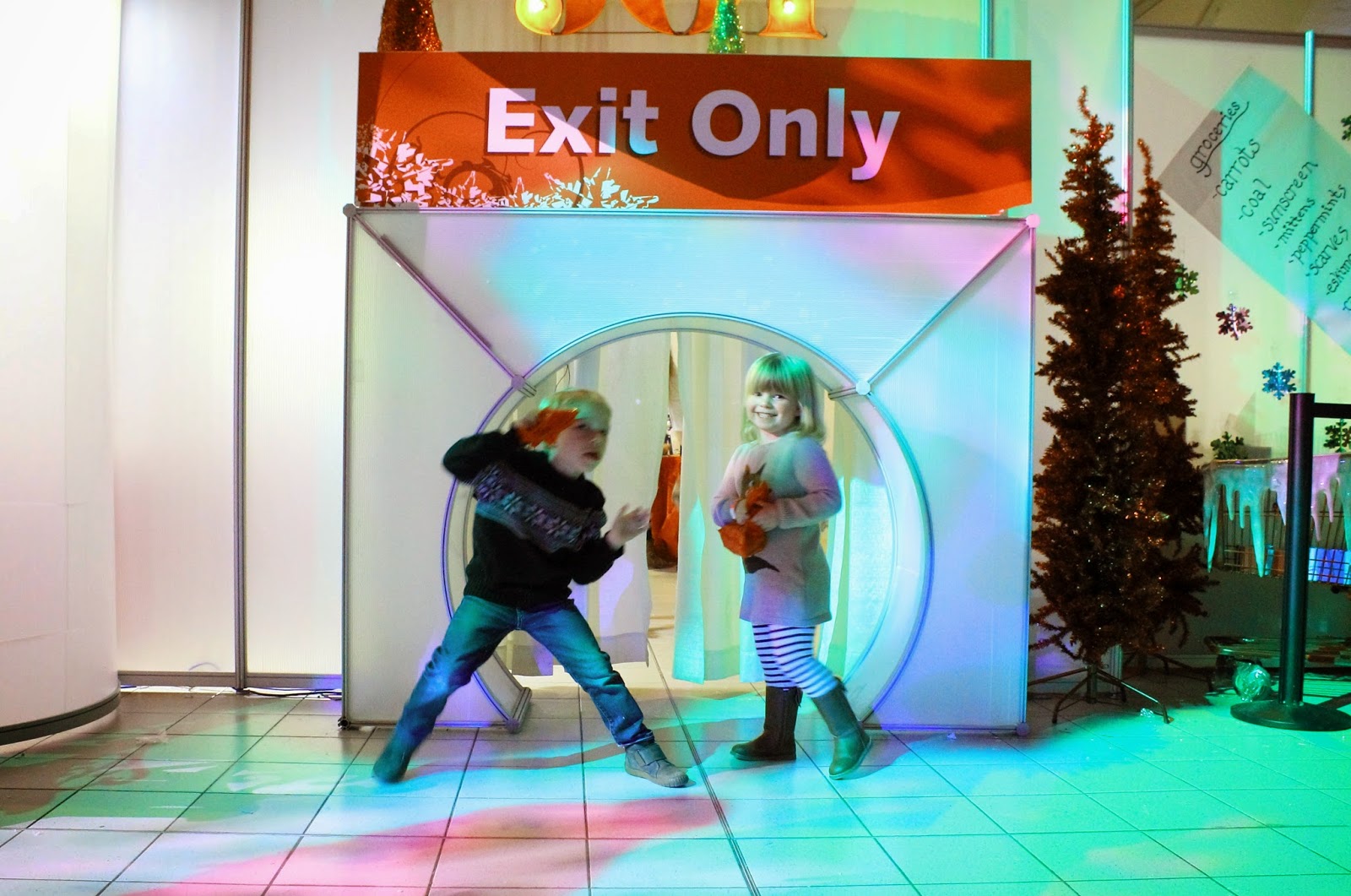 This is one of the best shots I could get of Charlie all night.
The kid just does not stay still!

On Sunday we headed to our favourite tree lot at the U of A to visit those trusty Forest Society students.
We browsed the trees and I thought of picking a pine with those nice long needles or a sparse Charlie-Brown-looking douglas fir but we just kept coming back to our tried and true Balsam.
And the students approved, saying that it gives off the best smell and lasts the longest.
They're the experts you know.
Cedric was a big help carrying the tree. 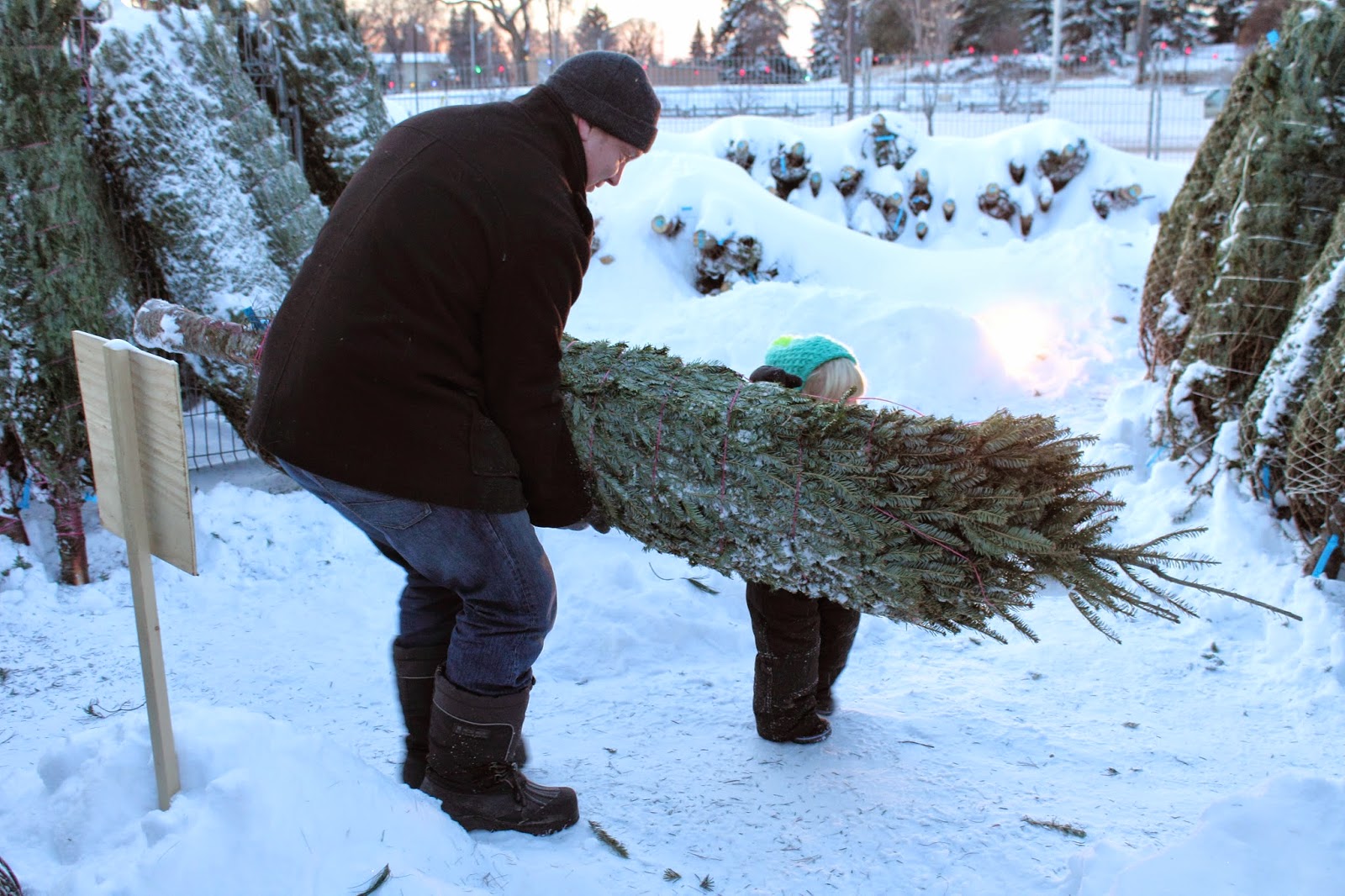 Fiona helped by cheesing up the lot. 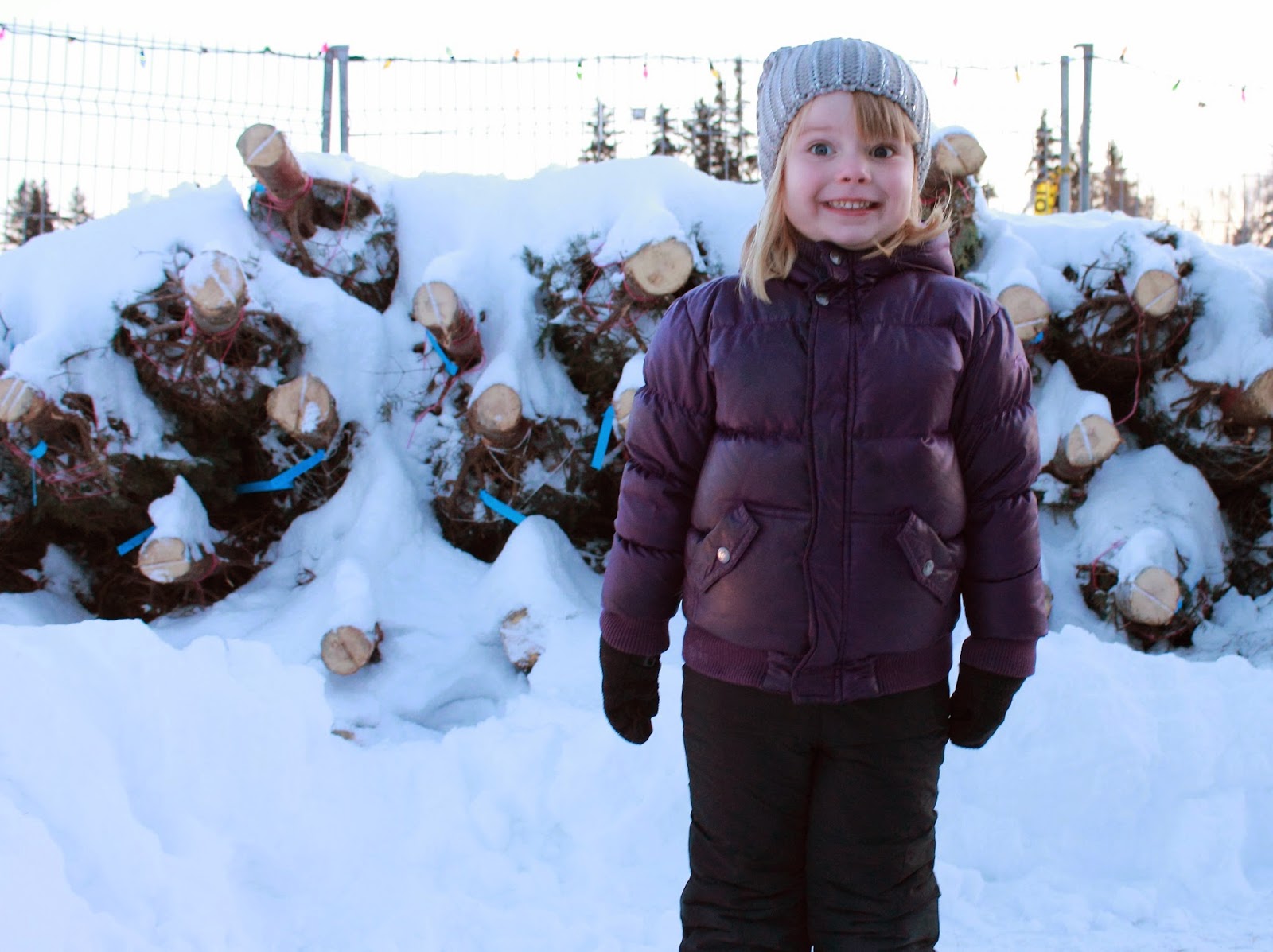 But the real smiles came when the candy canes were busted out.
I'm telling you, we just love those forestry students. 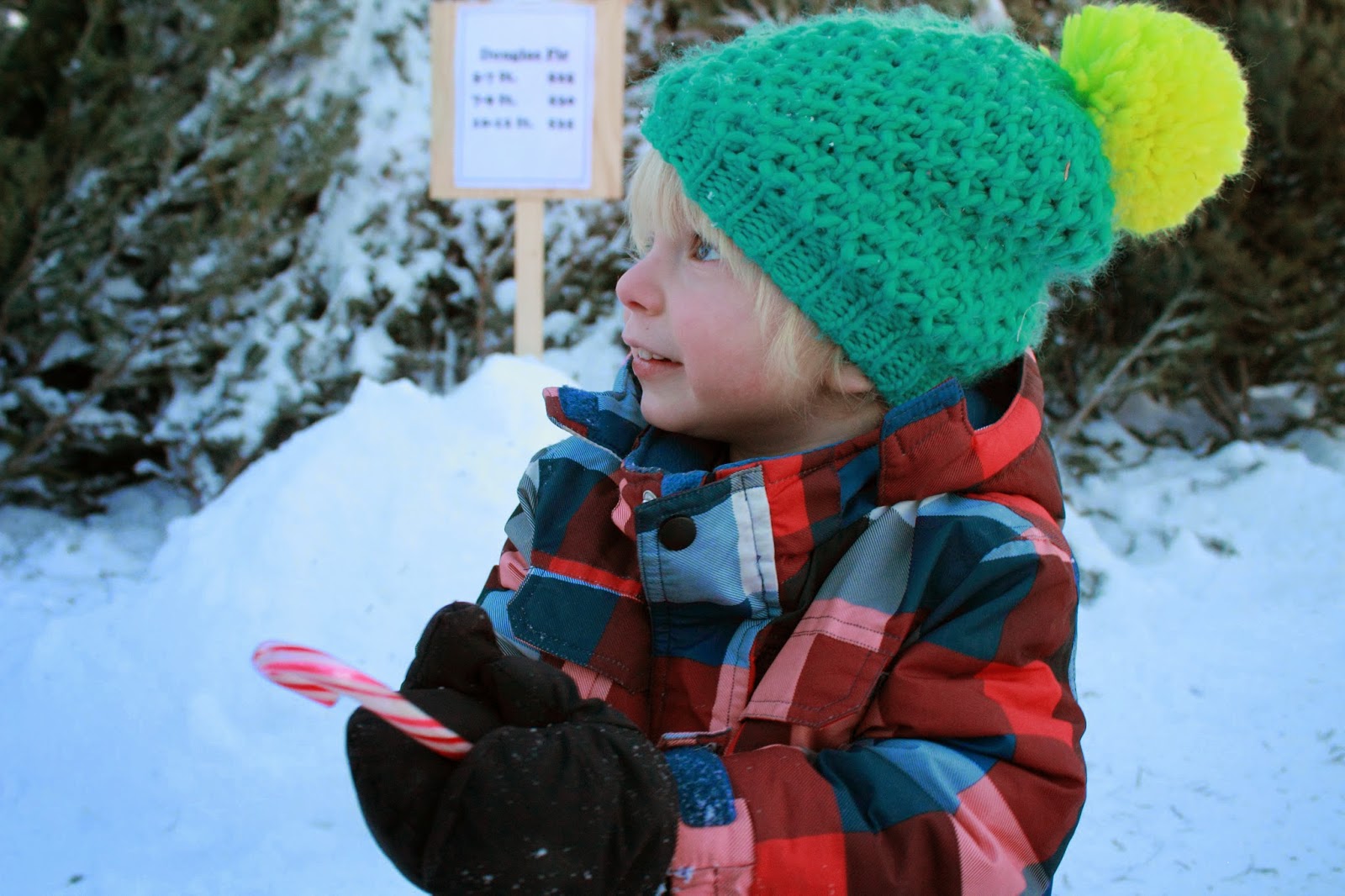 They sawed the bottom and even offered to load it on the car. 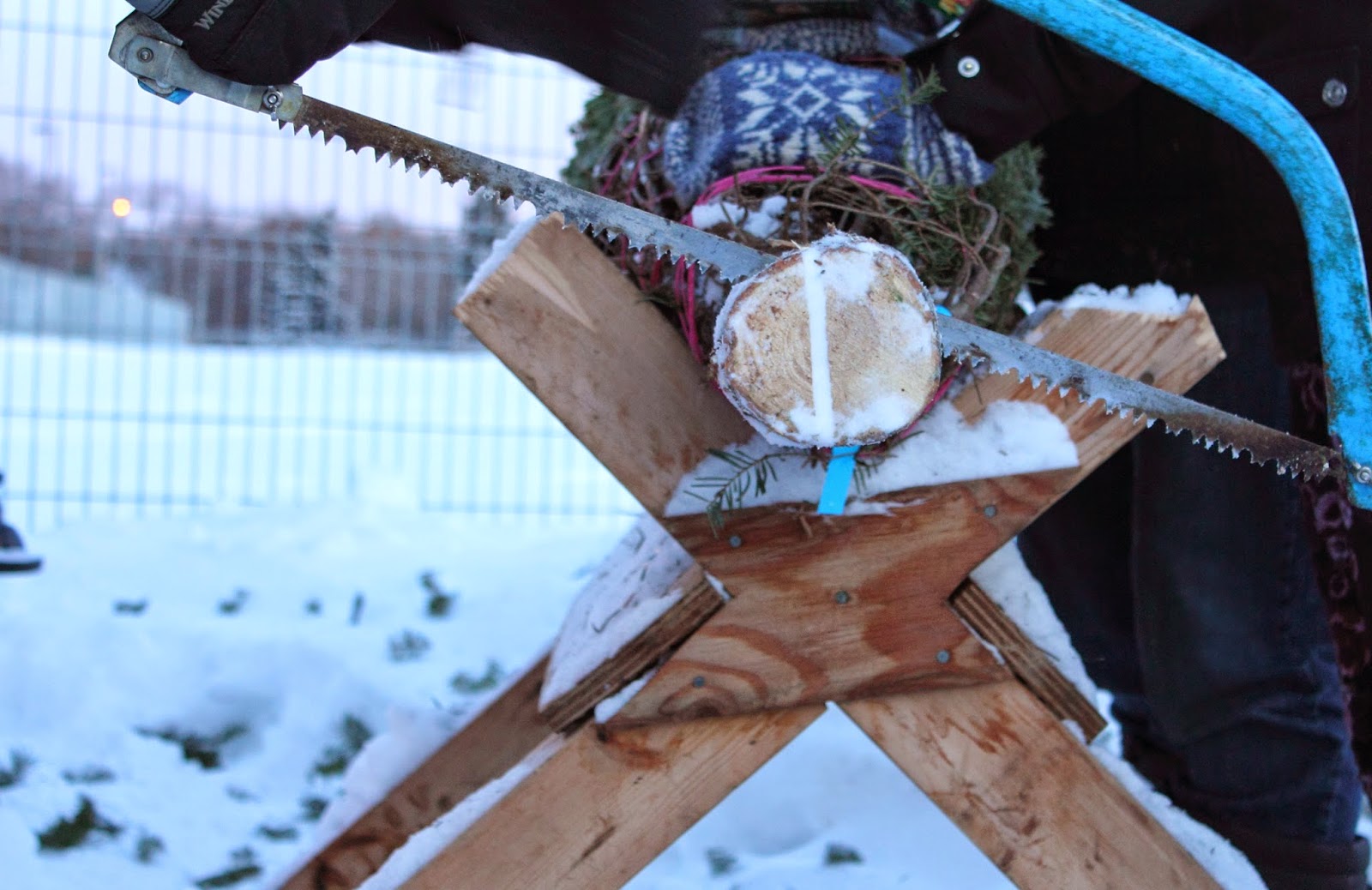 We declined since we were all prepared-like with bungee cords this year.
Fancy, I know. 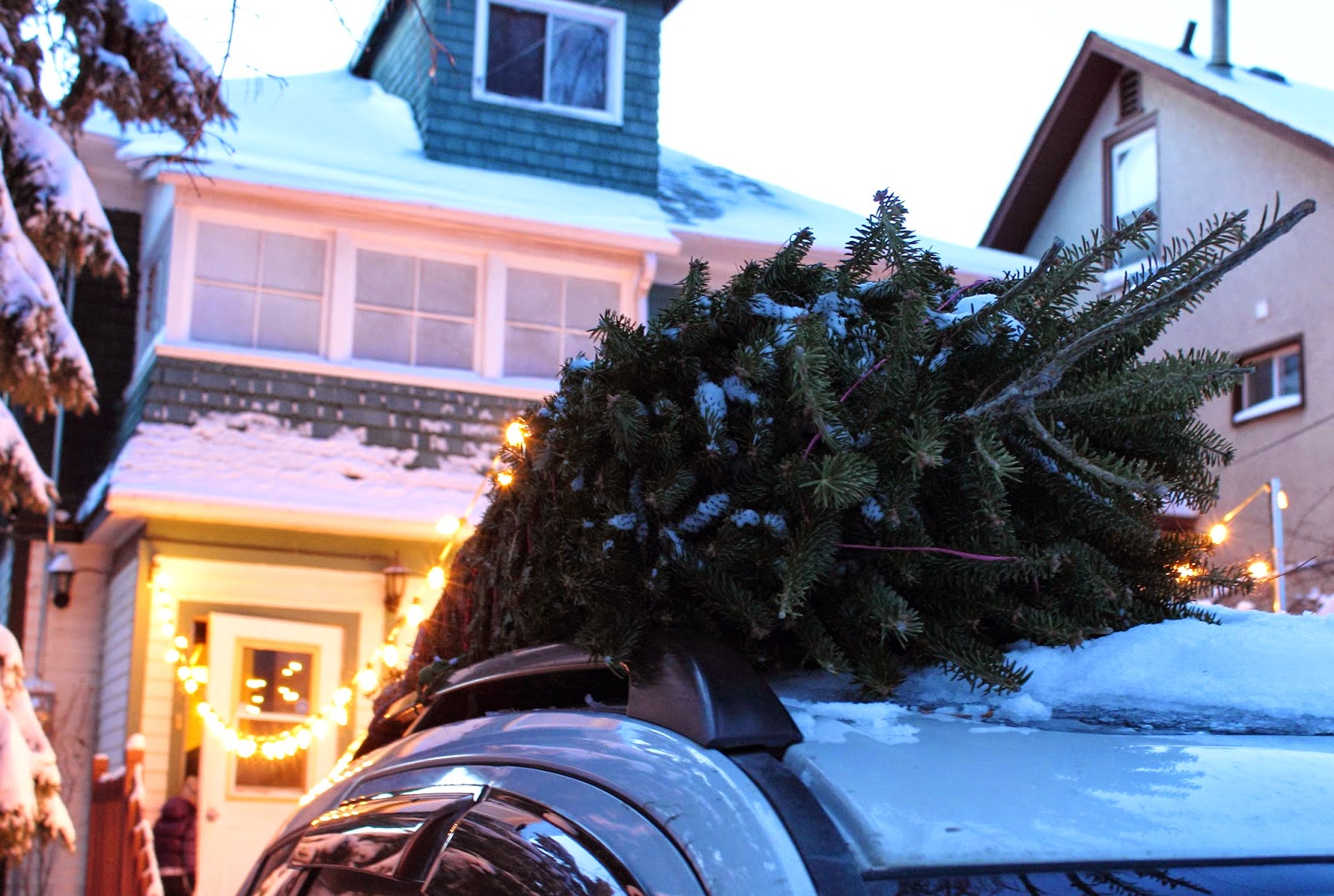 I forgot to get the shot of the tree loaded up at the lot which gave me the perfect excuse to get our lights in the background.
Christmas is officially in full swing over here.
Posted by cwesthicks at 10:18 PM 1 comment:

Just wanted to share a few pictures of our Halloween this year. 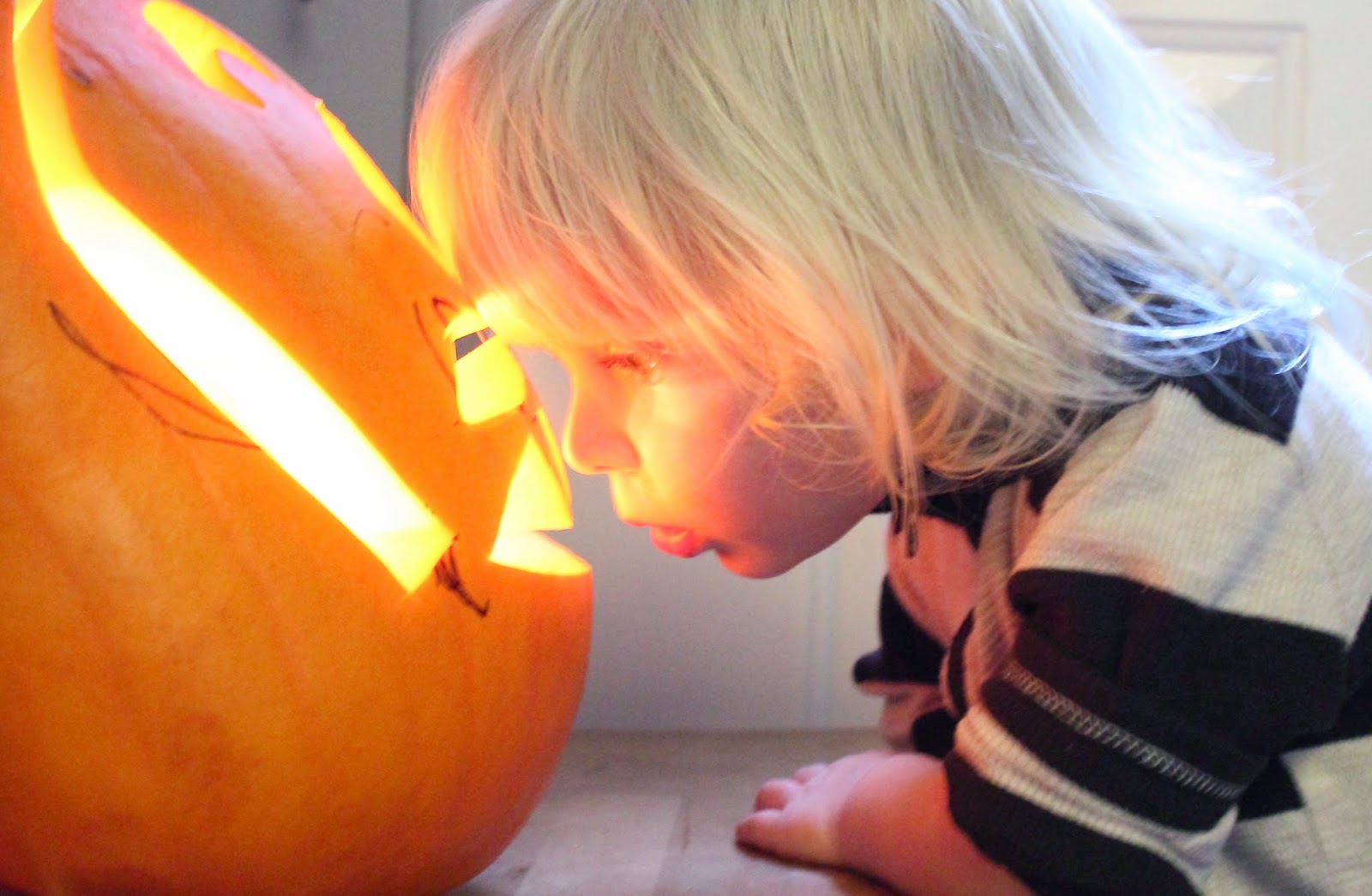 I did some stamping on the kids treat bags... 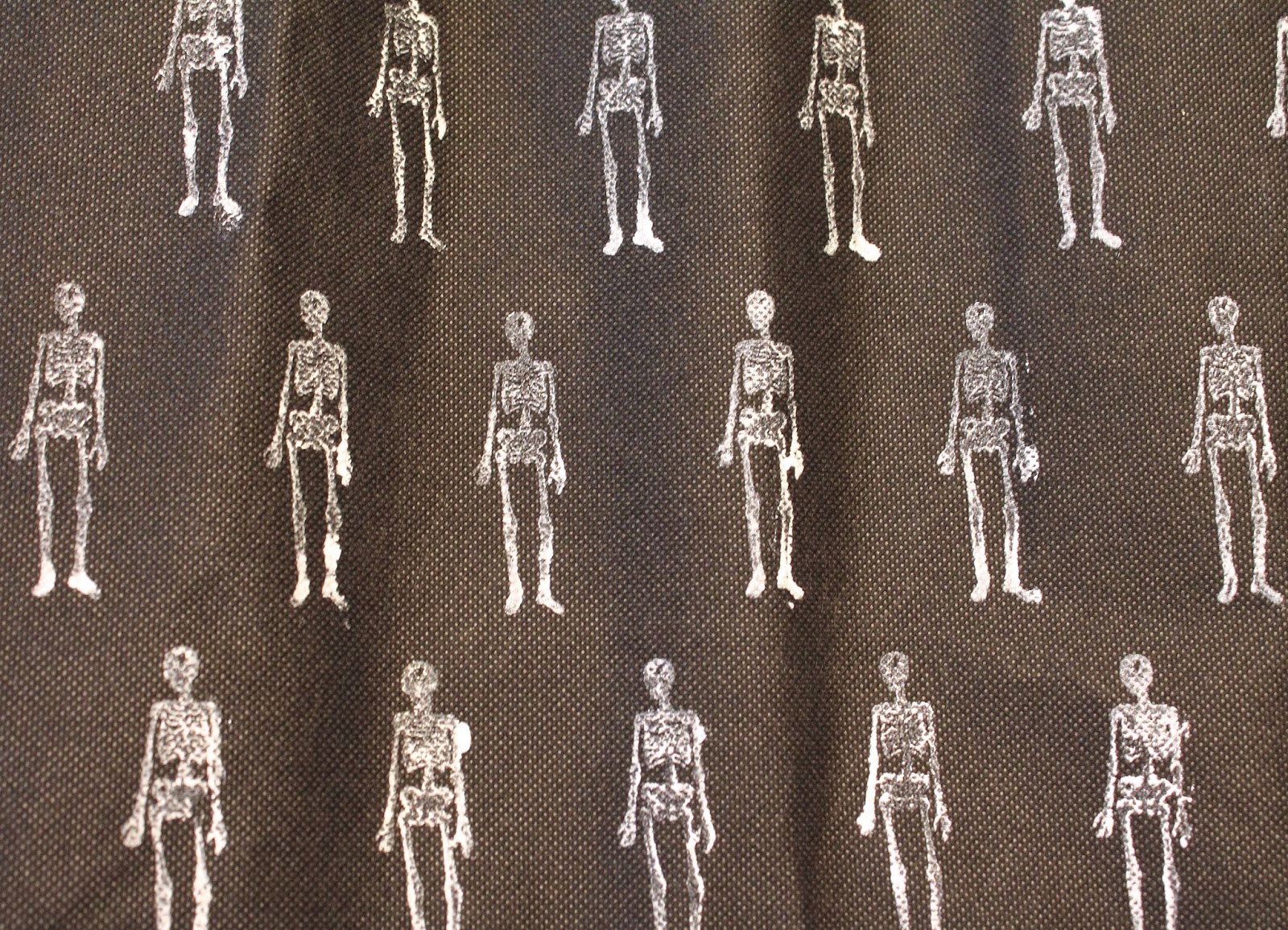 ...then let them go to town on the other side. 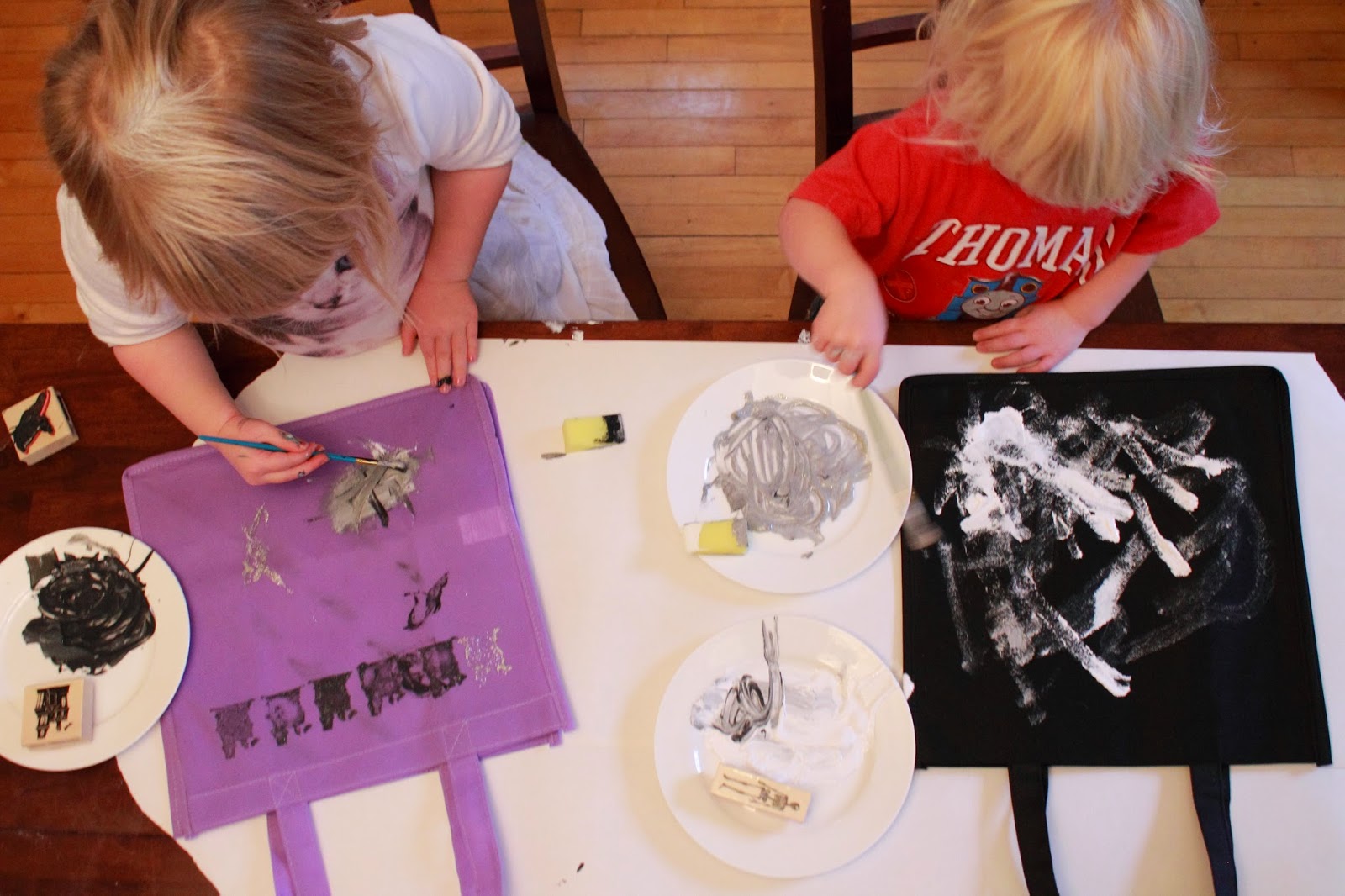 We also let Fiona go to town on the pumpkin design.
Just look at that concentration, this is bound to be a masterpiece right? 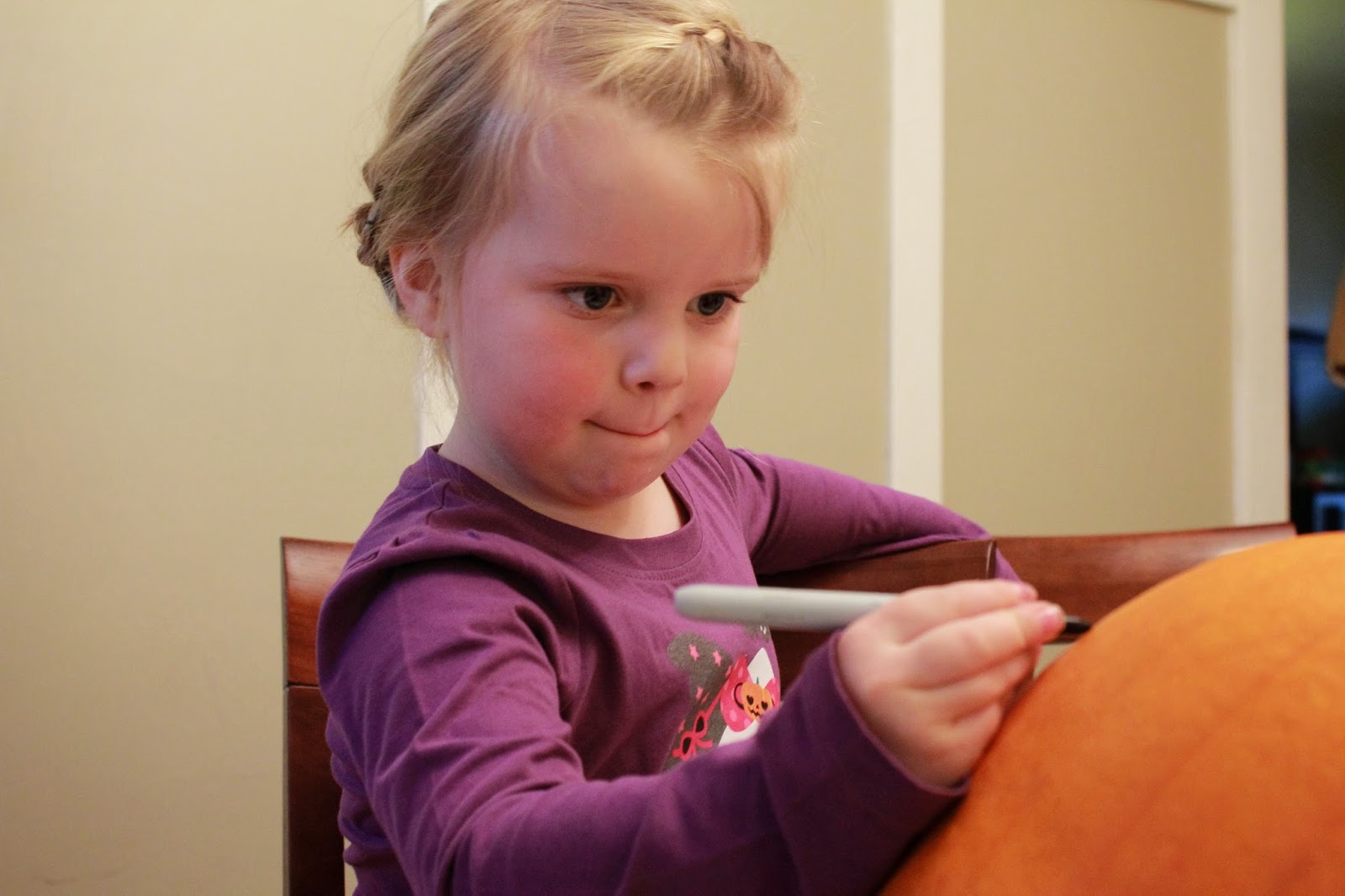 Well, art is subjective.
Mama, for one, thought it was great but may have taken a little artistic license when doing the carving.
Cedric was uninterested in the face but thought gutting the pumpkin was too good to be true. 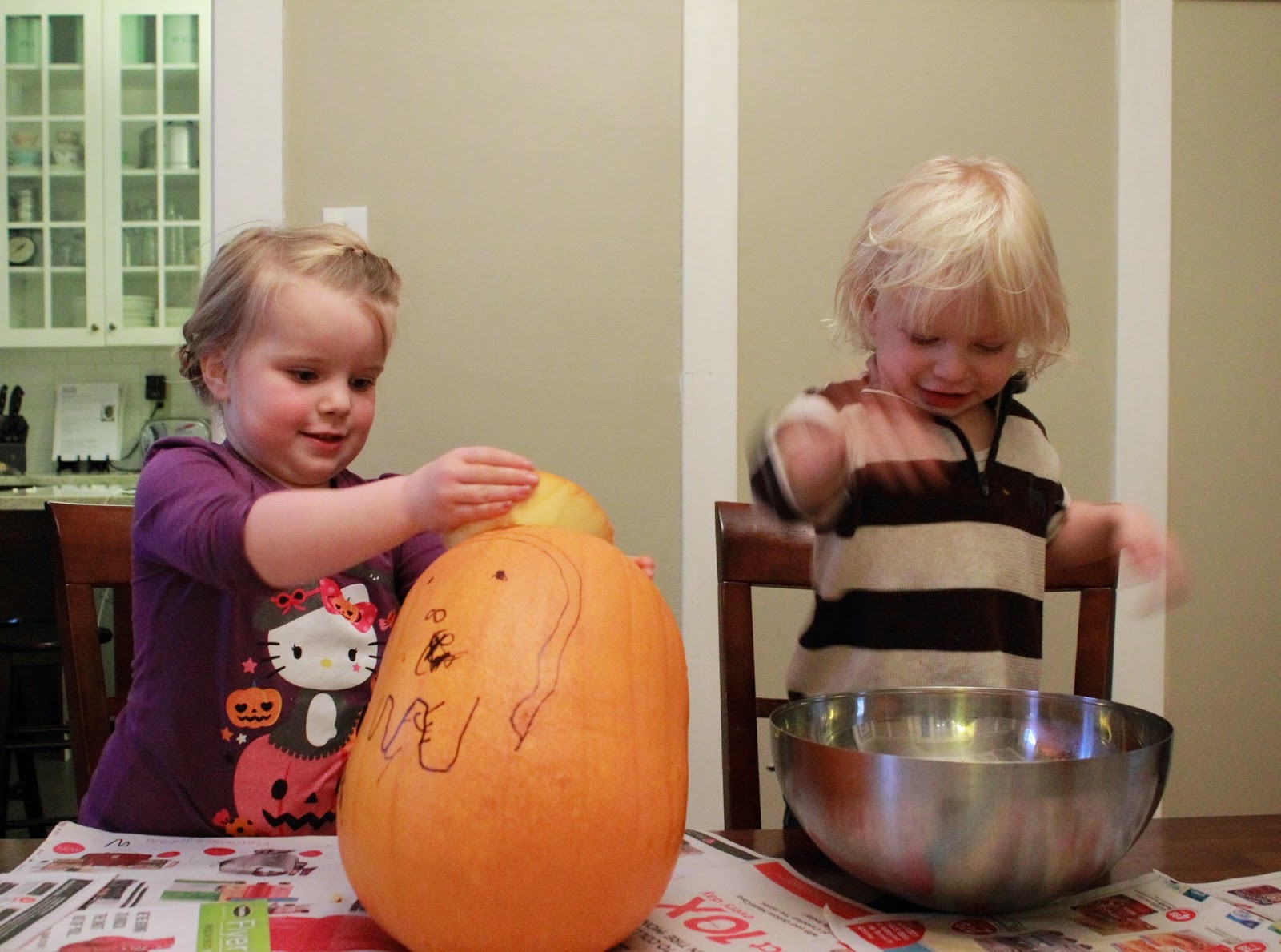 We lucked out with a temperature of about 5 C. 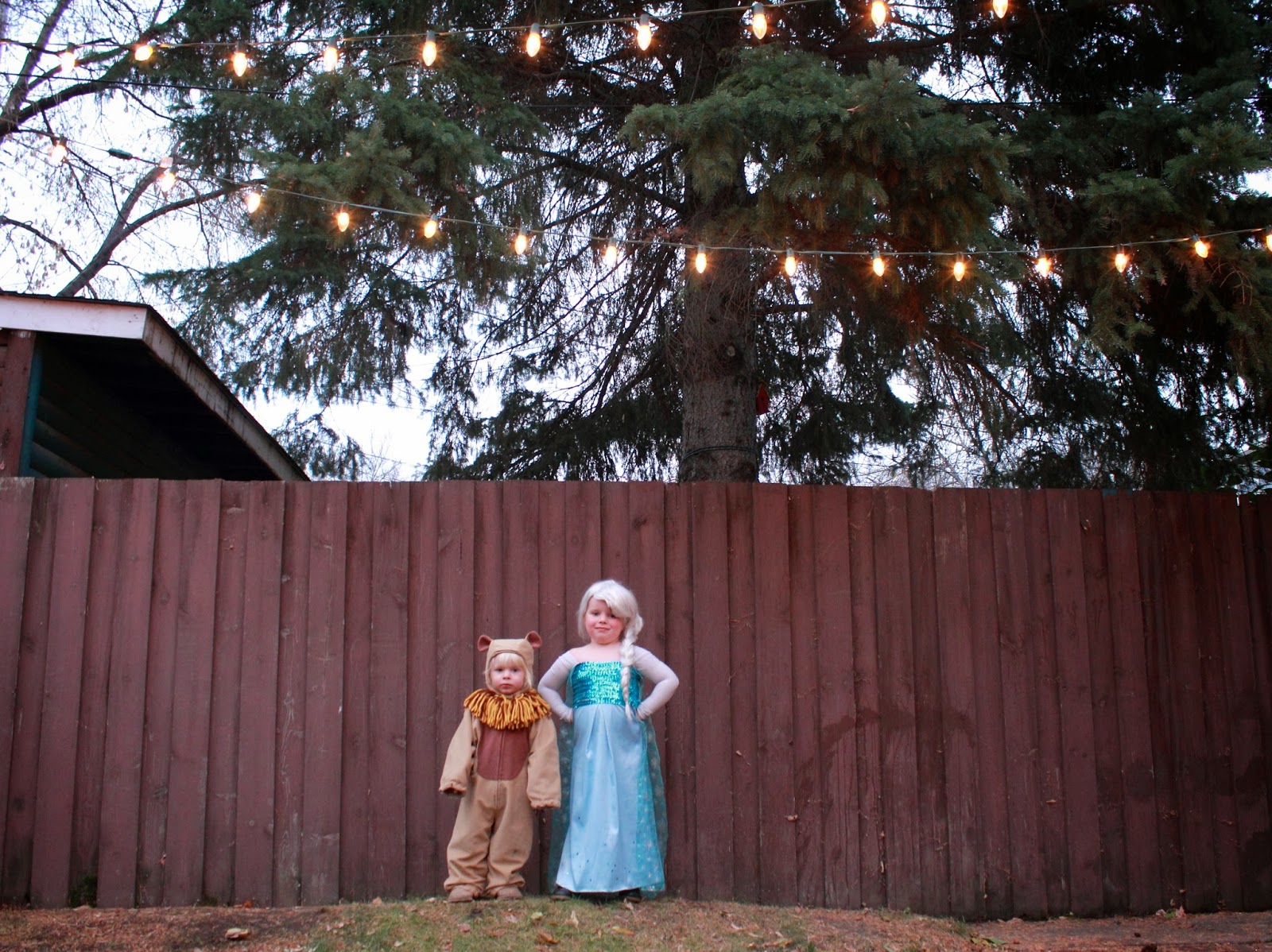 No snowsuit under the lion this year.
It was heartwarming to see Cedric wear this handmade costume that I, both my sisters and Fiona wore.
Good job making that one to last Mom. 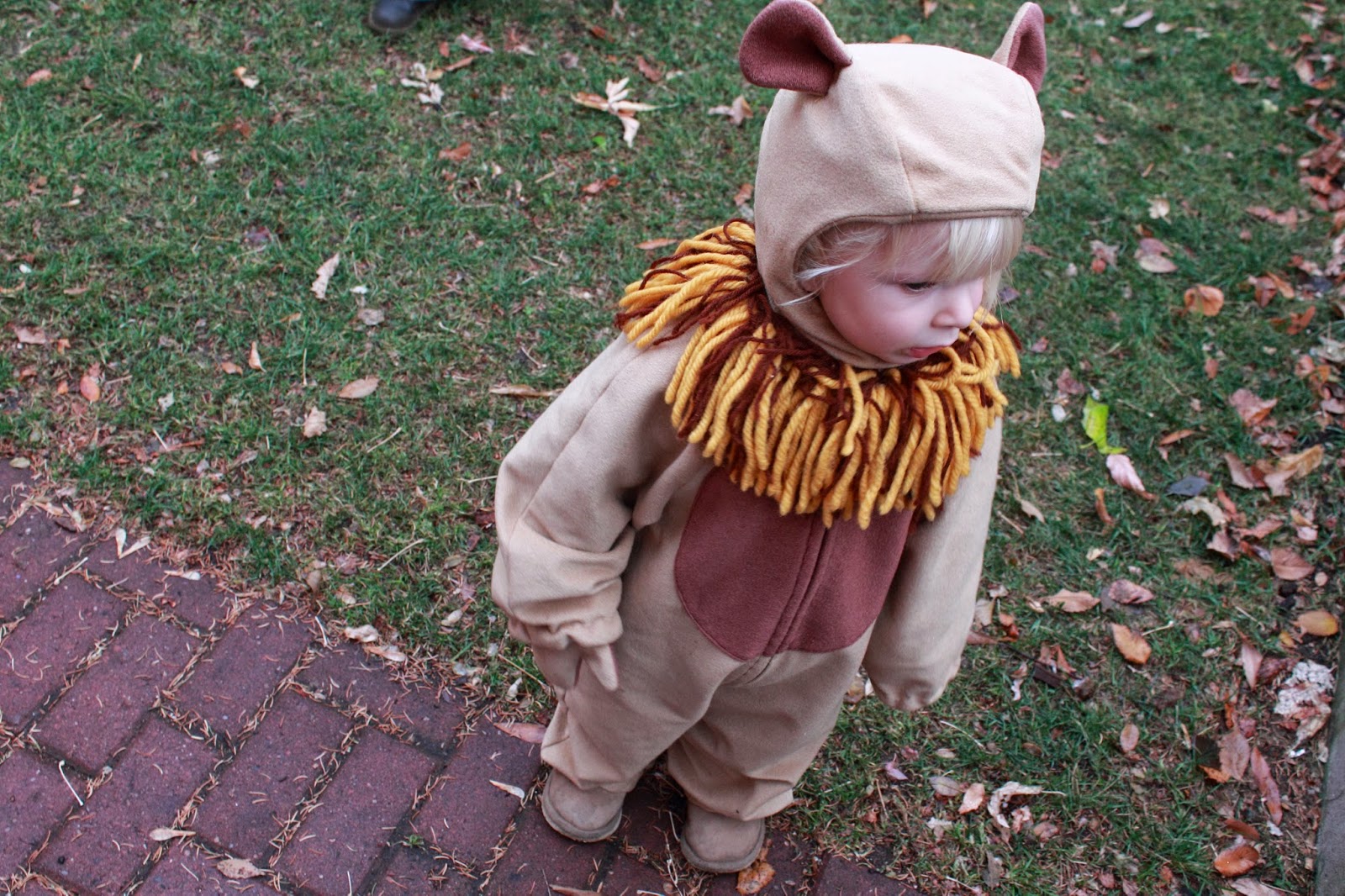 And no coat on this snow princess.
I raced behind her pestering "Fiona, are you cold? Fiona do you want your jacket?"
Each time the reply was a firm no.
The catch phrase of the night became "the cold never bothered her anyway." 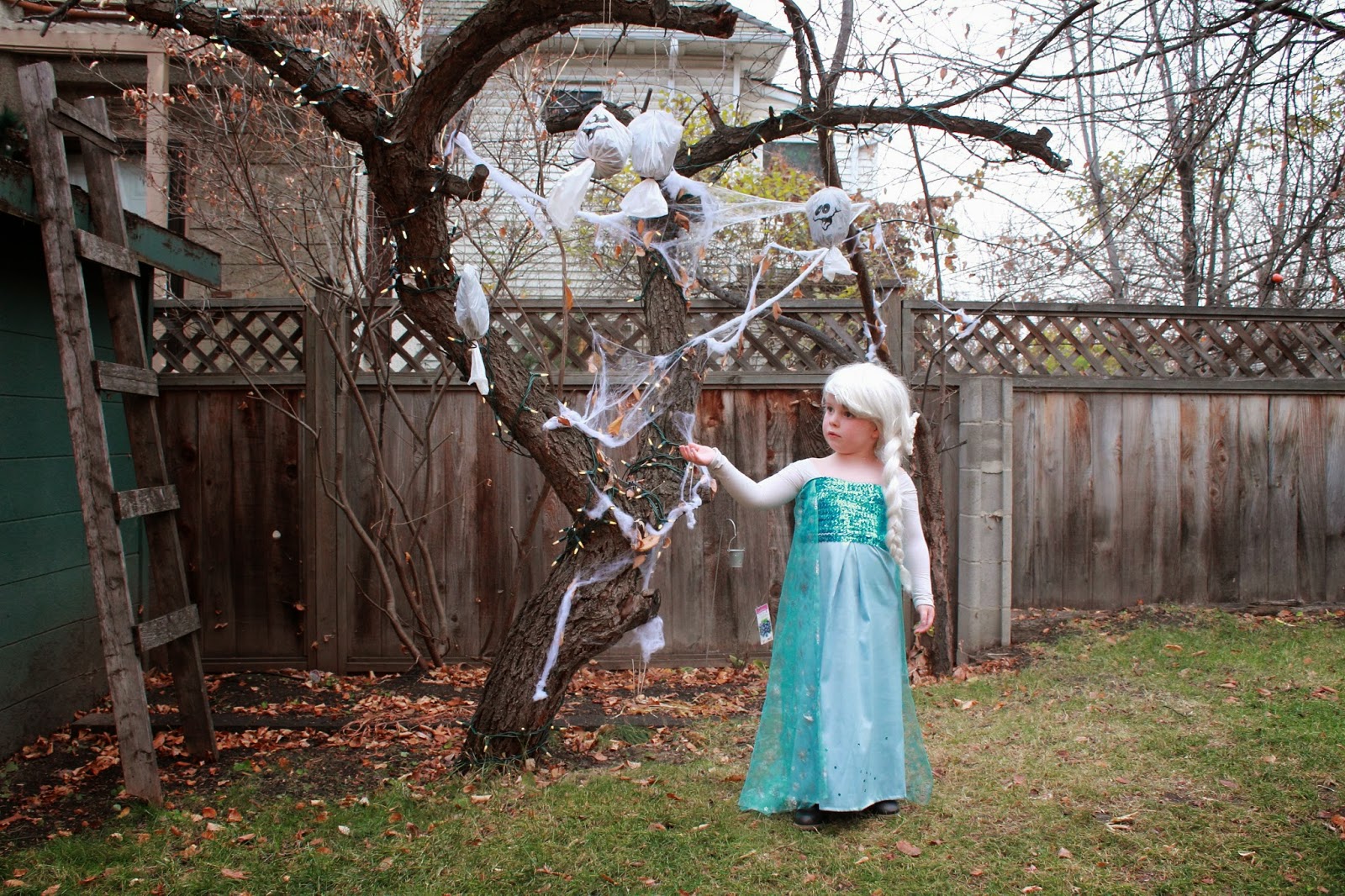 Hope you had a great one too.
Posted by cwesthicks at 8:16 AM No comments:

Email ThisBlogThis!Share to TwitterShare to FacebookShare to Pinterest
Labels: Halloween 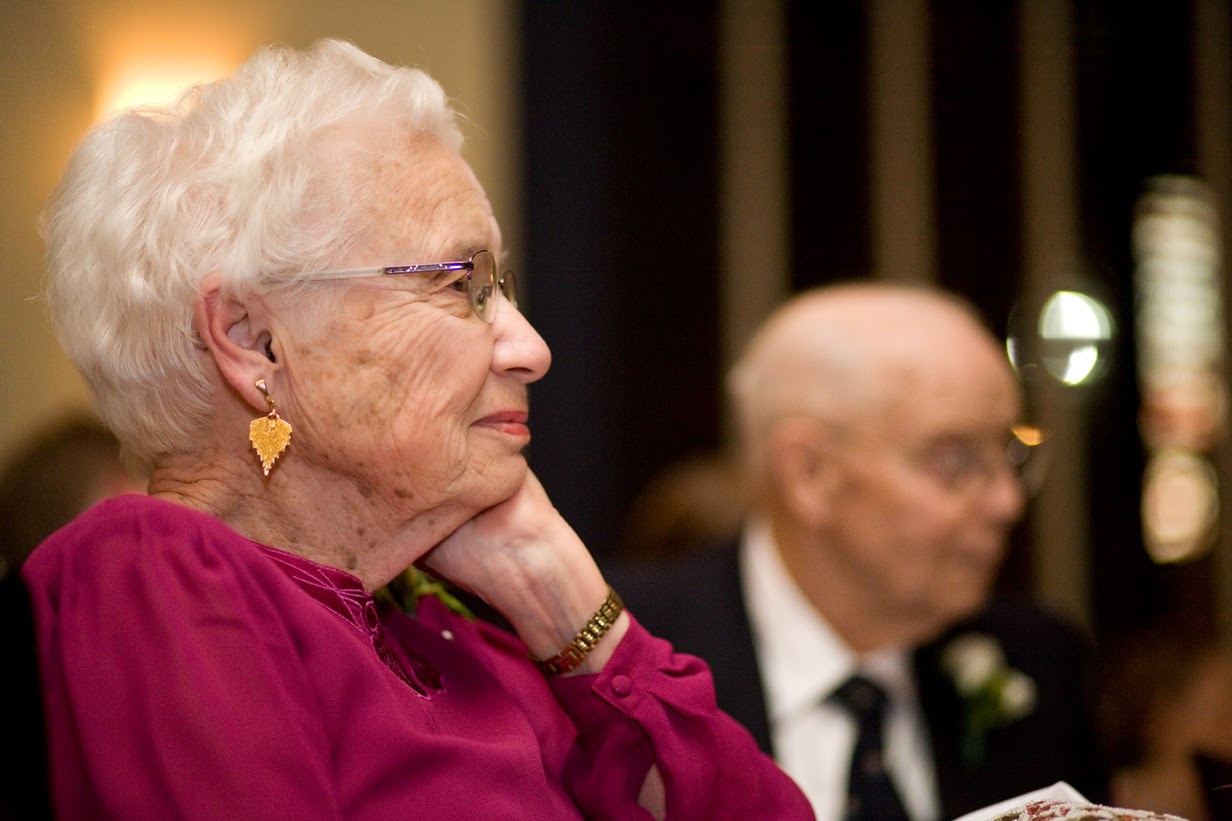 Dear Gram,
I spent yesterday surrounded by children full of joy and life.
As they ran carelessly from door to door I could imagine you smiling and commenting how they were just "full of it".
It was Halloween, a day I can't recall ever spending with you.
But in a way it was a great day to remember your beautiful spirit.
My own kids love their GG and they are certainly not the first.
I saw you only once in your classroom of kindergarteners.
I was Fiona's age and not yet in school but you let me participate with your kids.
I remember looking at you, my Gram the teacher, with even more awe.
You were one of the strongest, most confident and most intelligent women I knew. 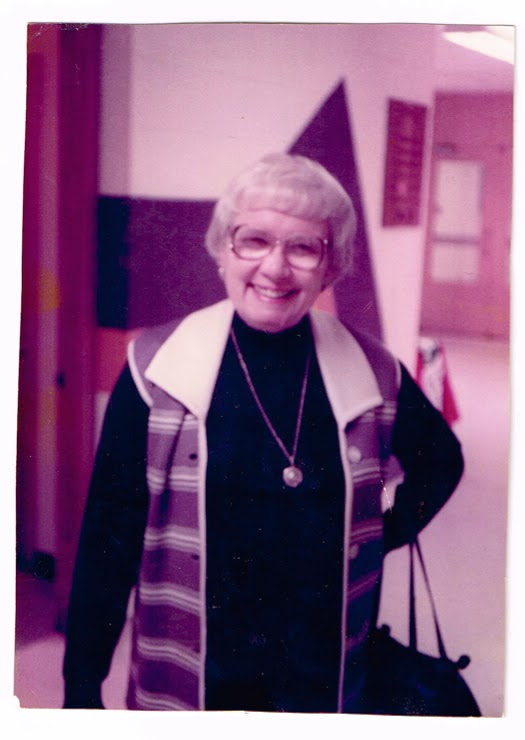 And that was before I really knew you.
As a child you enriched my life in ways I couldn't understand and I often took that for granted.
You always wanted the best for us and you were anything but quiet about it.
As an adult I am so grateful to have had such a positive force in my life. 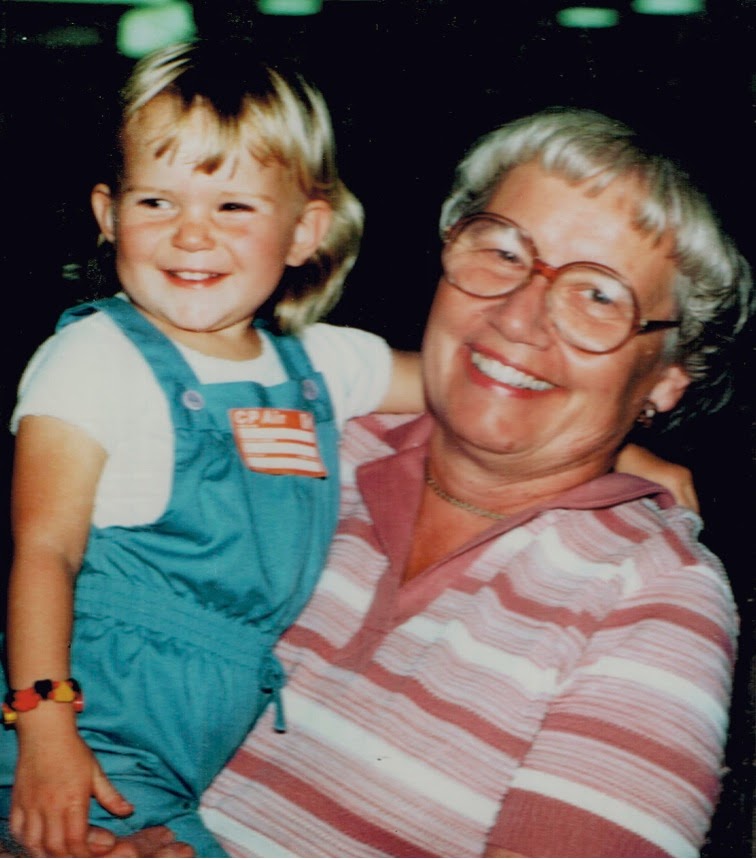 You were stylish.
I have few memories of you without a fabulous scarf, necklace, earrings or brooch.
But never too much, you were always accessorized to perfection. 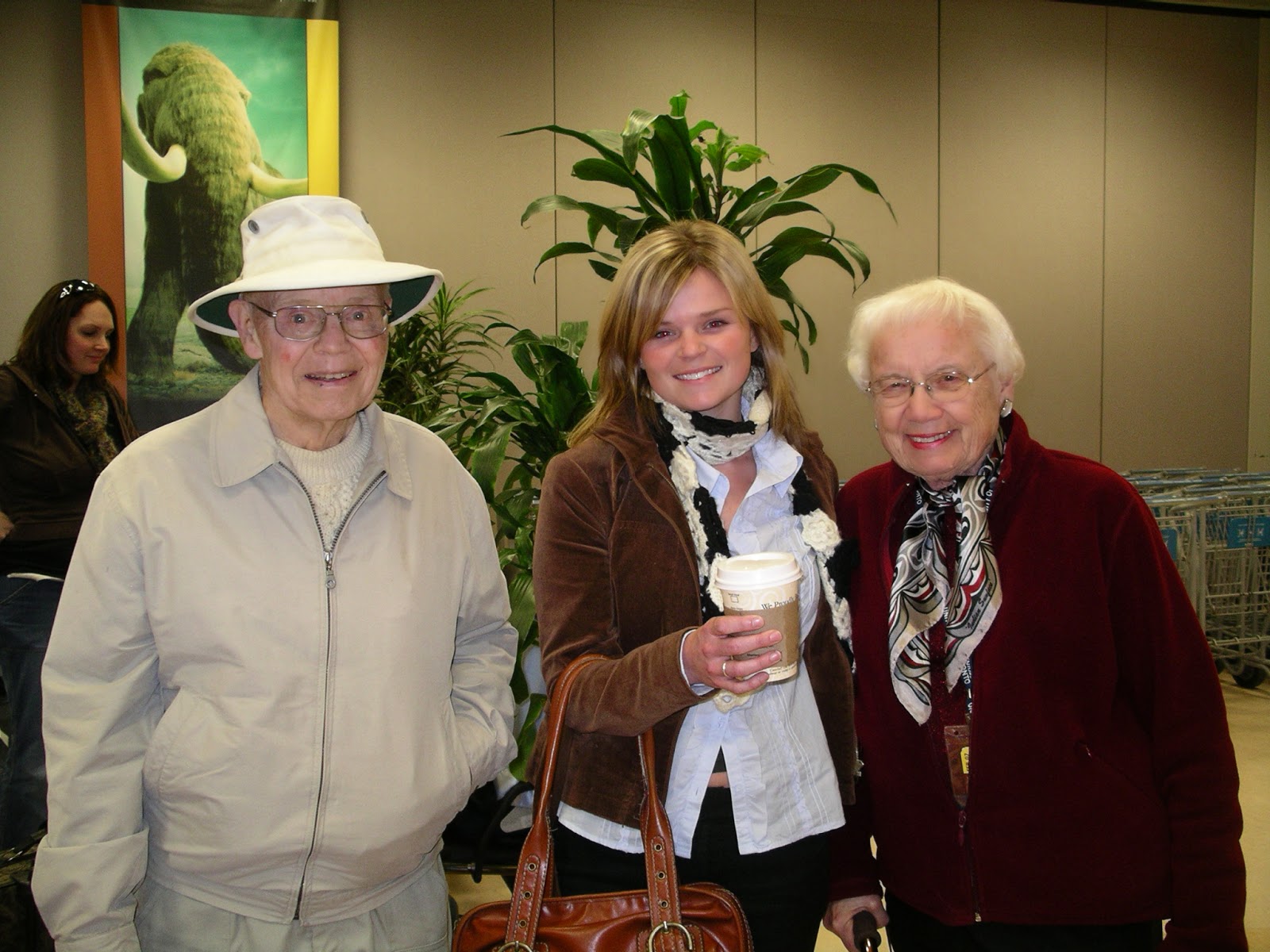 You were sophisticated.
Literature, theatre, music, gardening, travel, you did it all.
We recently started visiting the public library again and the shelves of books make me think of you.
In my 20's I remember reading a book on your recommendation and being shocked at the racy content.
You never ceased to amaze me with your openness to experiences and change.
That Macbook that gave us so many face to face moments is just one of the many examples of how, even in your 80's, no skill was beyond you.
Not if it knew what was good for it.

I turned the radio to CBC2 to hear some classical music that you loved so.
The selection was gothic, meant to channel thoughts of the afterworld.
I laughed through the tears since I was sure that you would find some humour in the irony. 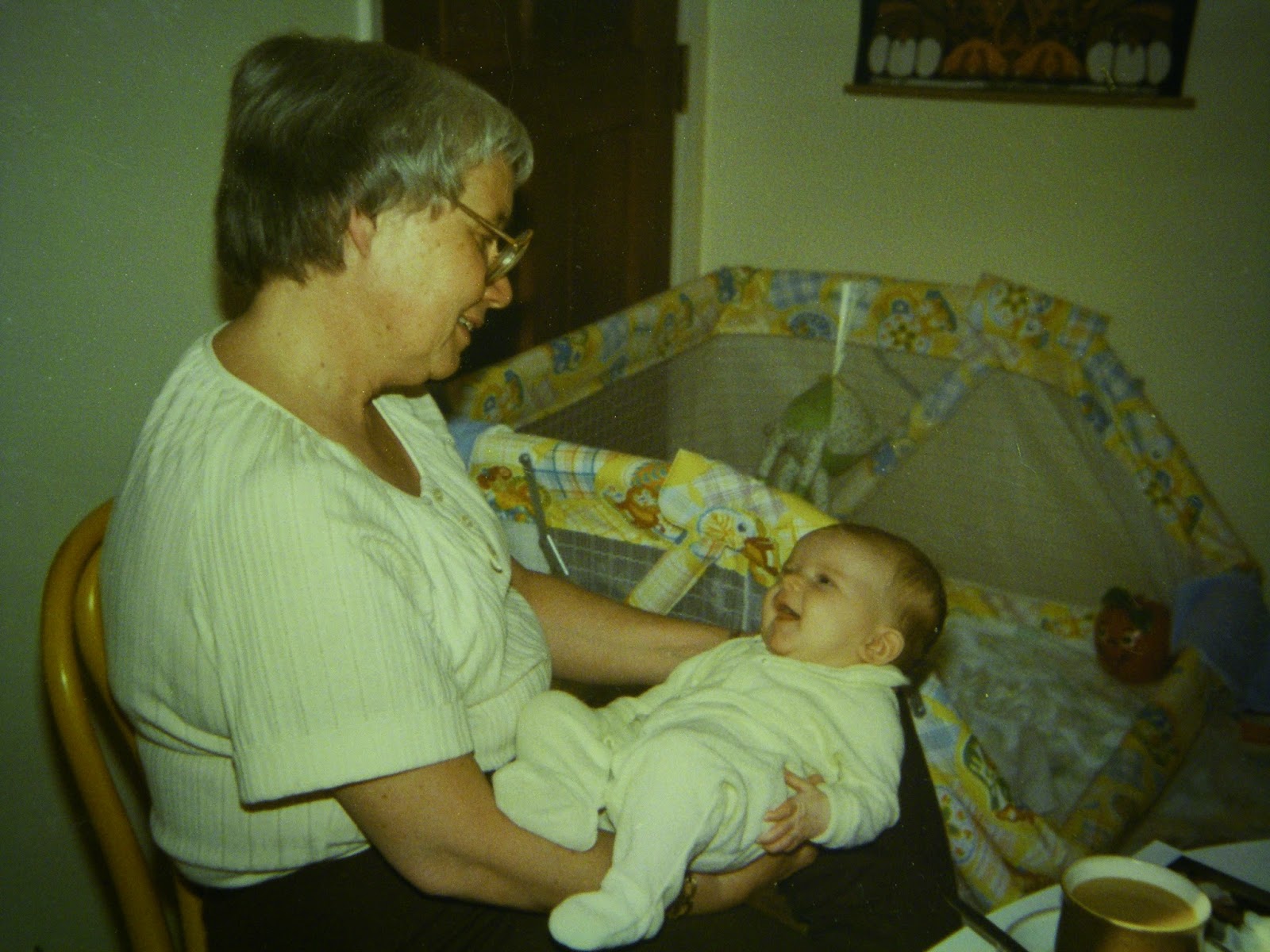 My african violet bloomed a couple of days ago and it prompted me to think of you.
Thank you for leaving us all with so many ways to remember your full and inspirational life.
Lots of love.

Posted by cwesthicks at 5:09 PM No comments: