The celebration is officially over.
Cedric has turned two and we have thoroughly recognized that fact.
The final piece of that puzzle being, of course, the party. 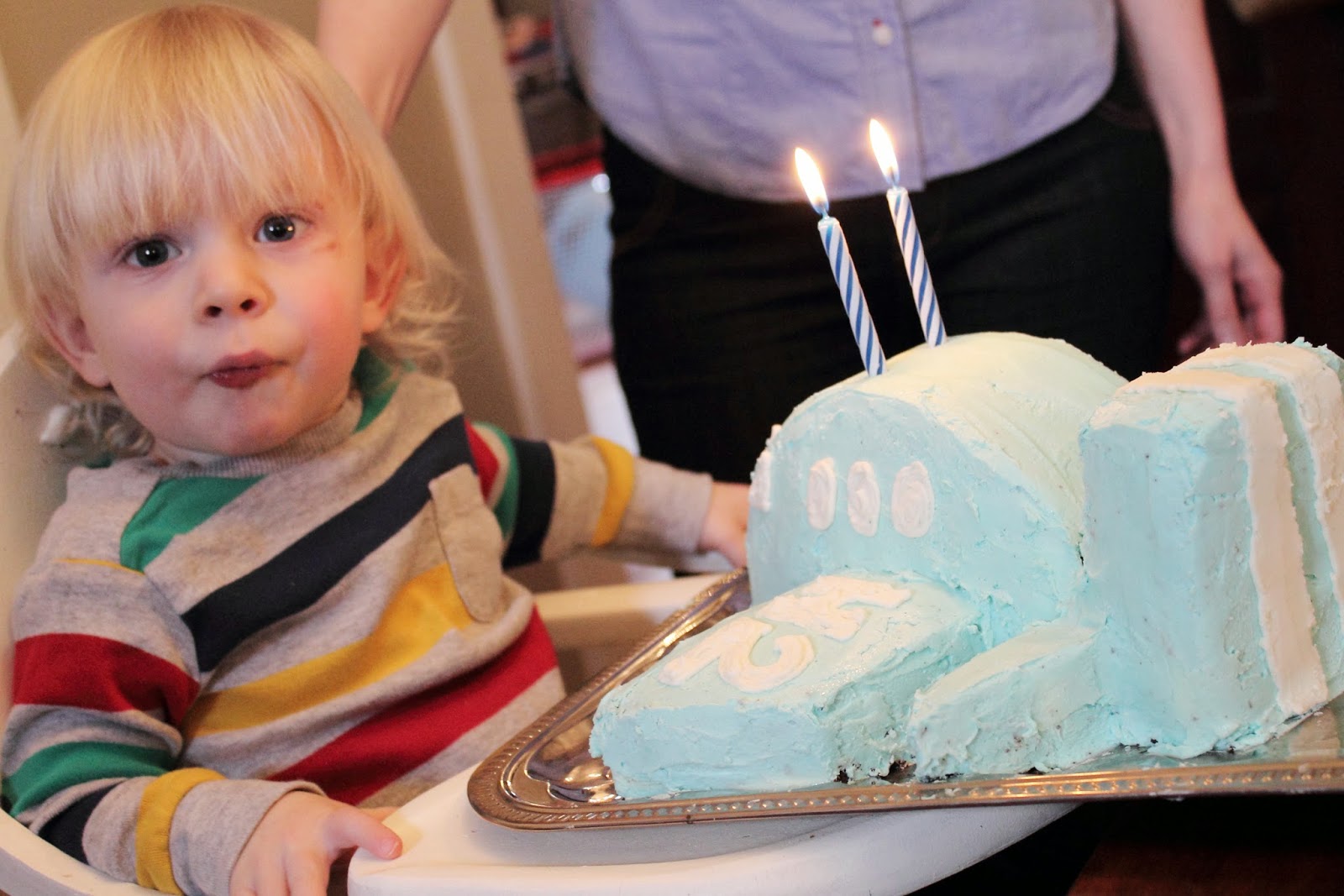 Between Germany and colorguard and well, life I dropped the planning ball and sent these email invites out during the week prior. 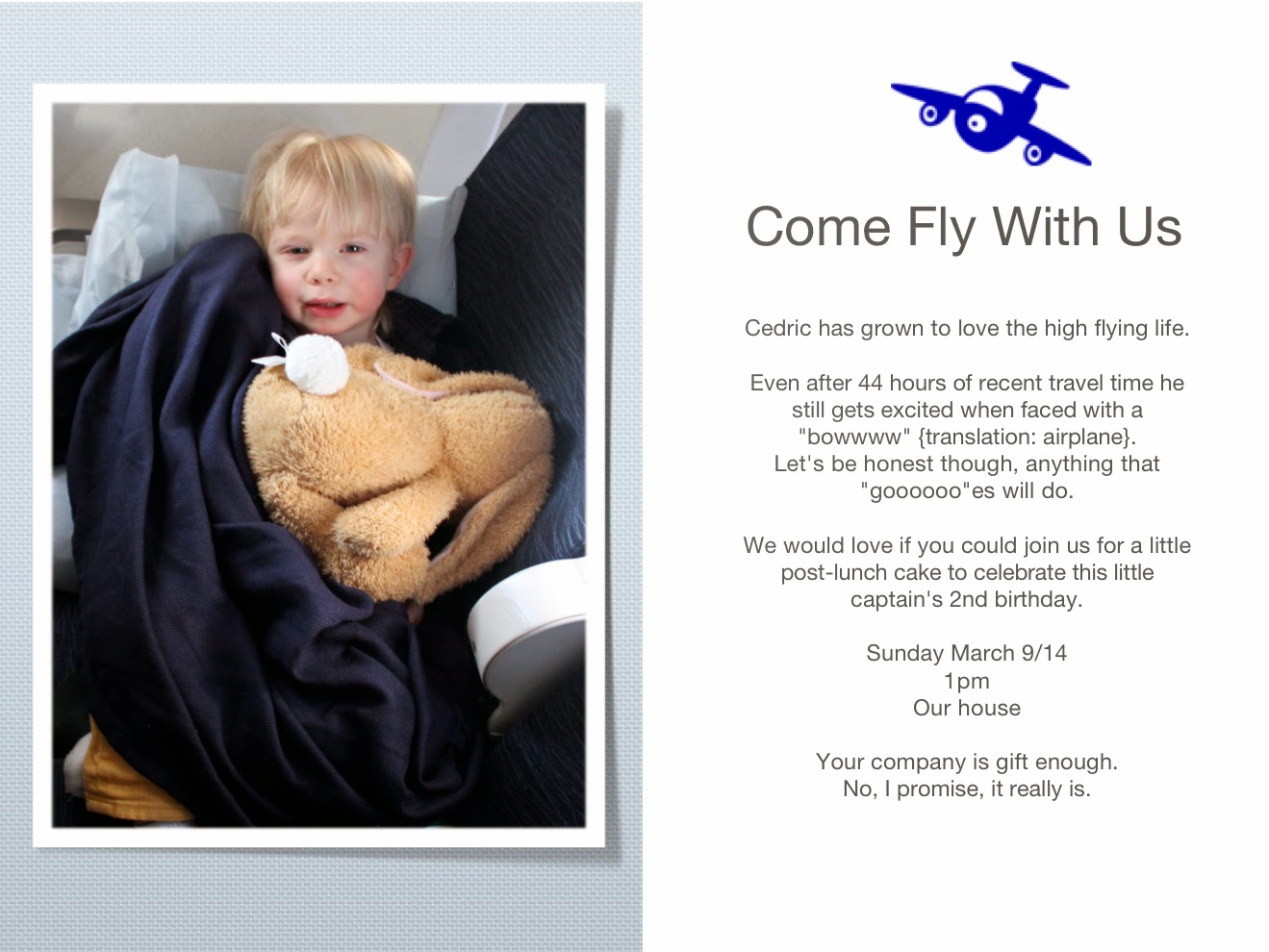 Luckily most of our friends made it and the kids had a blast.
My no gift request was initially because I didn't want anyone rushing around finding a last minute gift.
But if I'm being honest it was so lovely to only have a few gifts trickle in over the last couple of weeks.
After a birthday I would usually have an overwhelming need to purge and there is none of that this year.
Now don't go feeling sorry for Cedric, he still received more that enough for his birthday I assure you.
I like to choose a theme to at least guide the cake I will be making.
Cedric is totally obsessed with planes at the moment so it wasn't a hard choice. 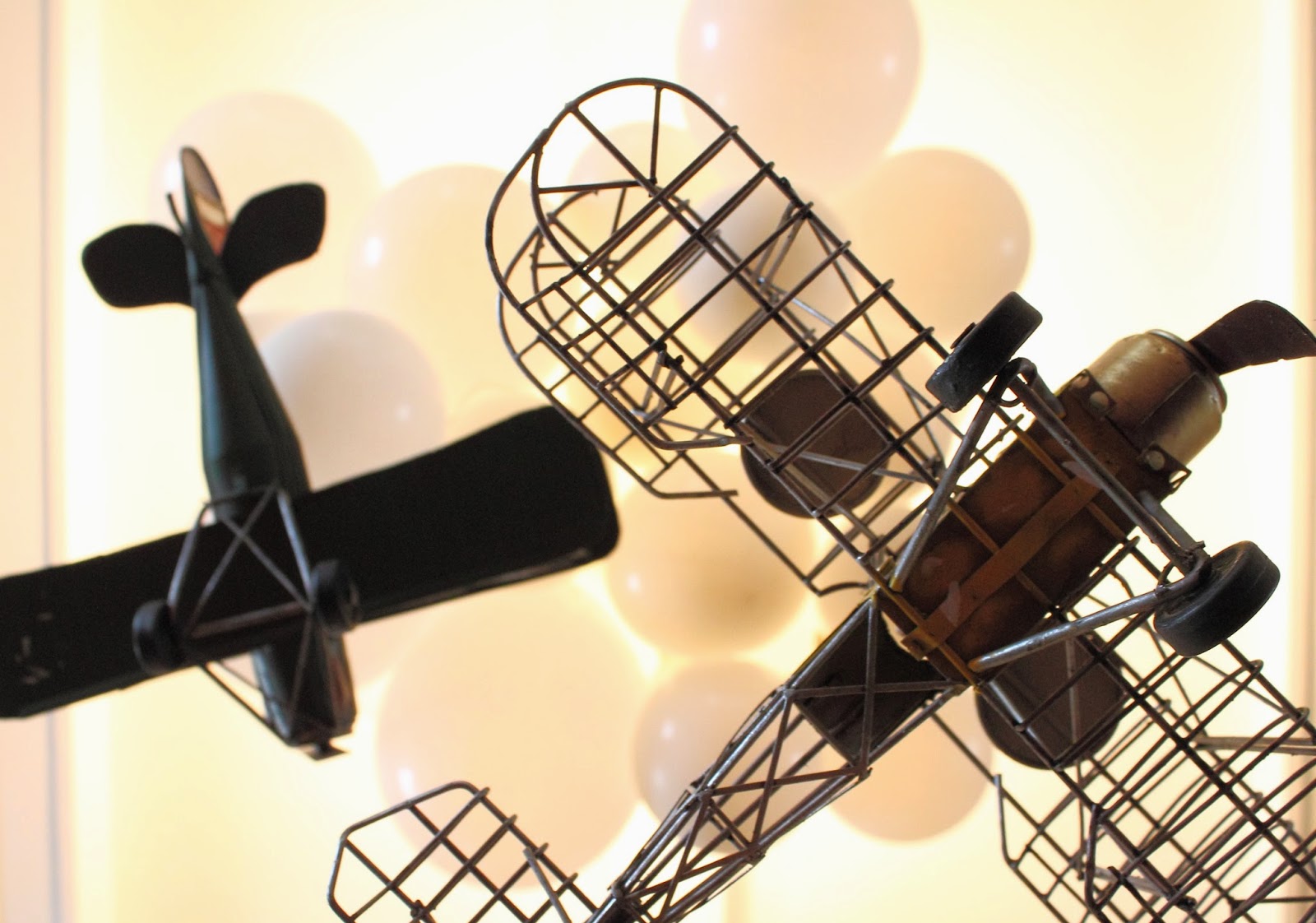 I searched for airplane cake templates and came across this Mom's brilliant design.
I just added a little to the cut detail here and pieced it together a little differently so even though it's not my original idea I still wanted to share.
I loved that only one cake batch was required, keeping it simple.
I used this chocolate cake recipe again because I always love the way it turns out.
After you bake your 2 9" round cakes you simply cut both in half.
That's the only cut for cake #1.
Then cut one of cake #2's halves in half again and cut a third off the end of the other half. 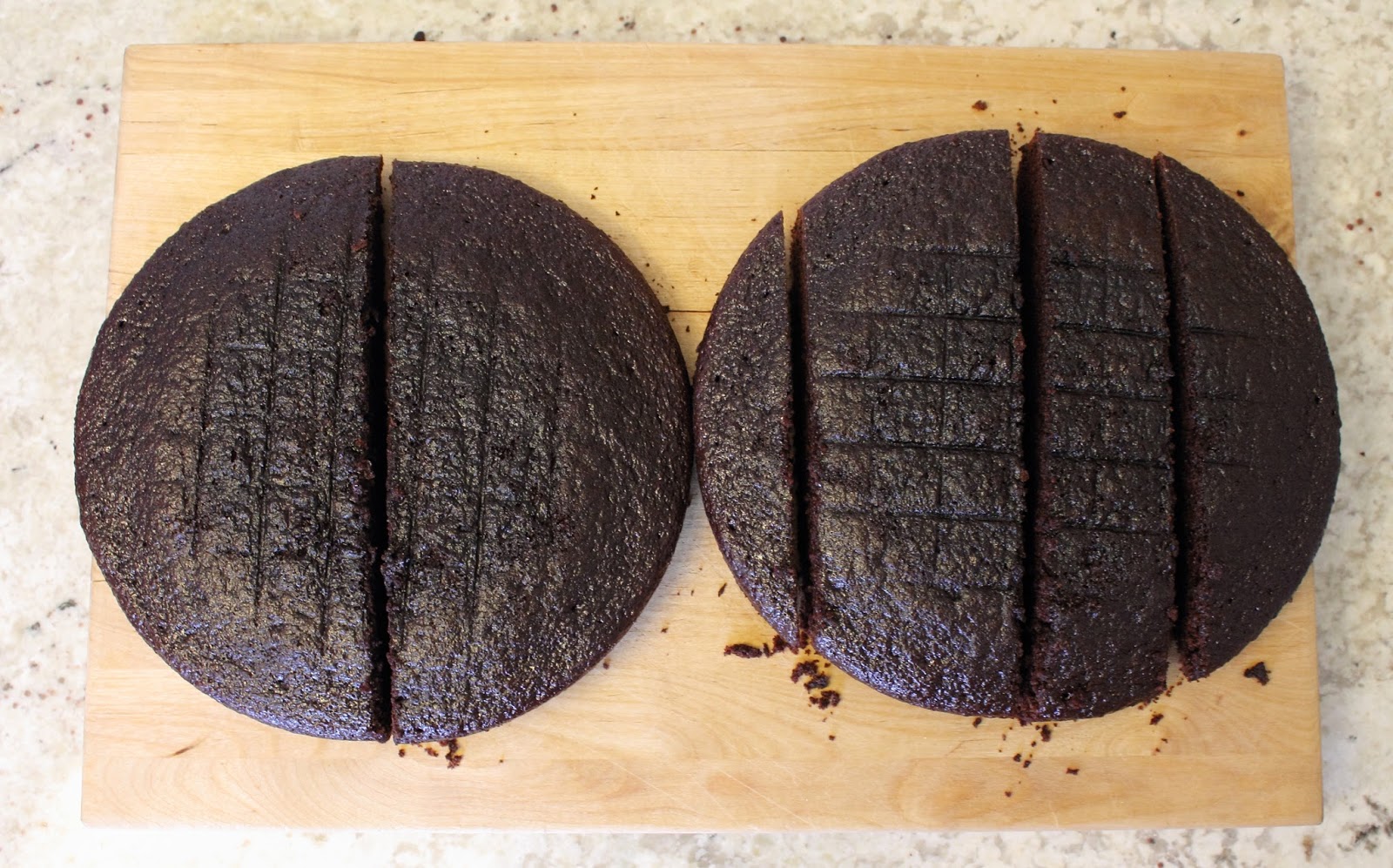 Secure the 2 halves of cake #1 together with icing. 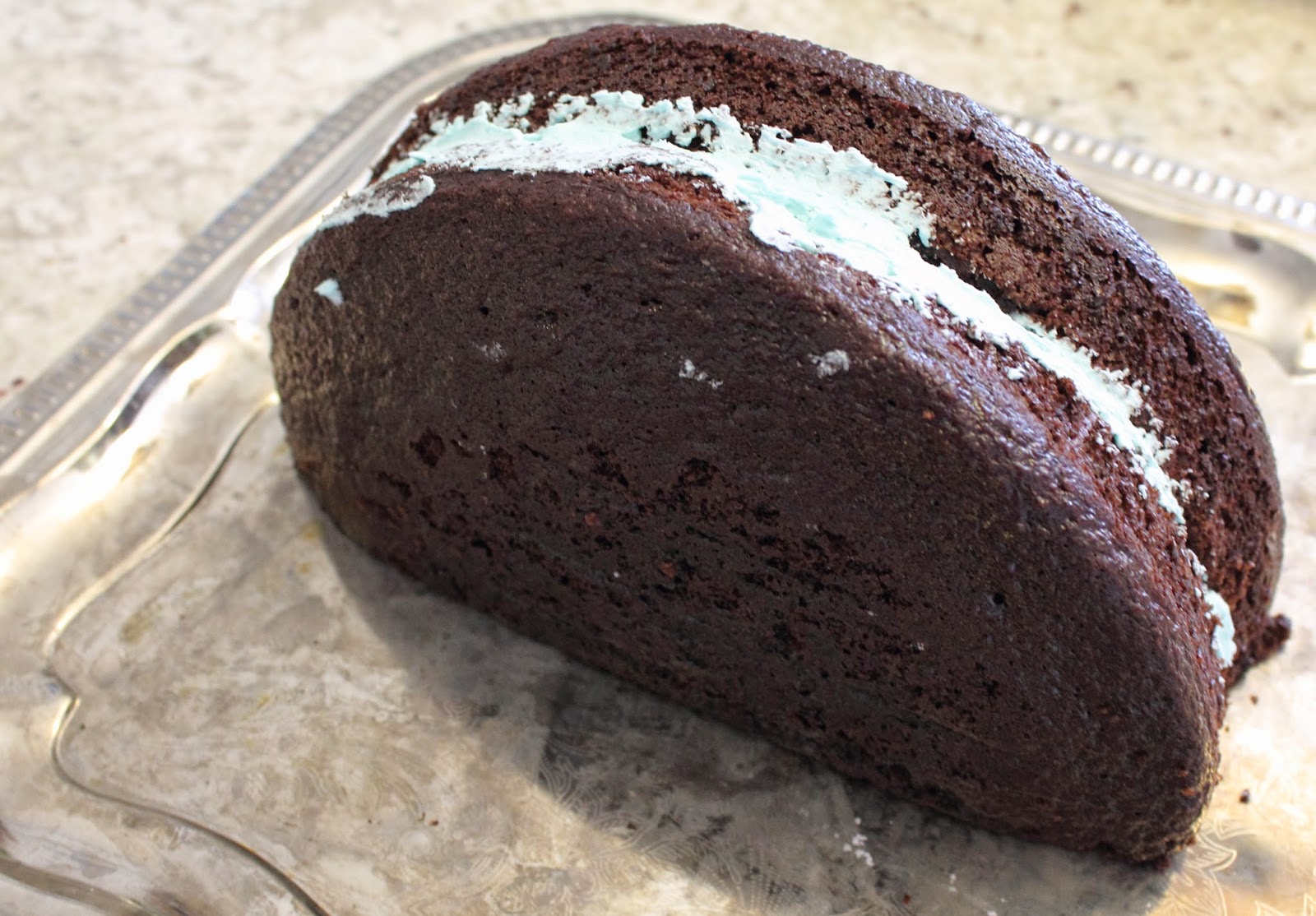 The last cut is to split each of the sections of cake #2 except the end quarter {which is extra}. 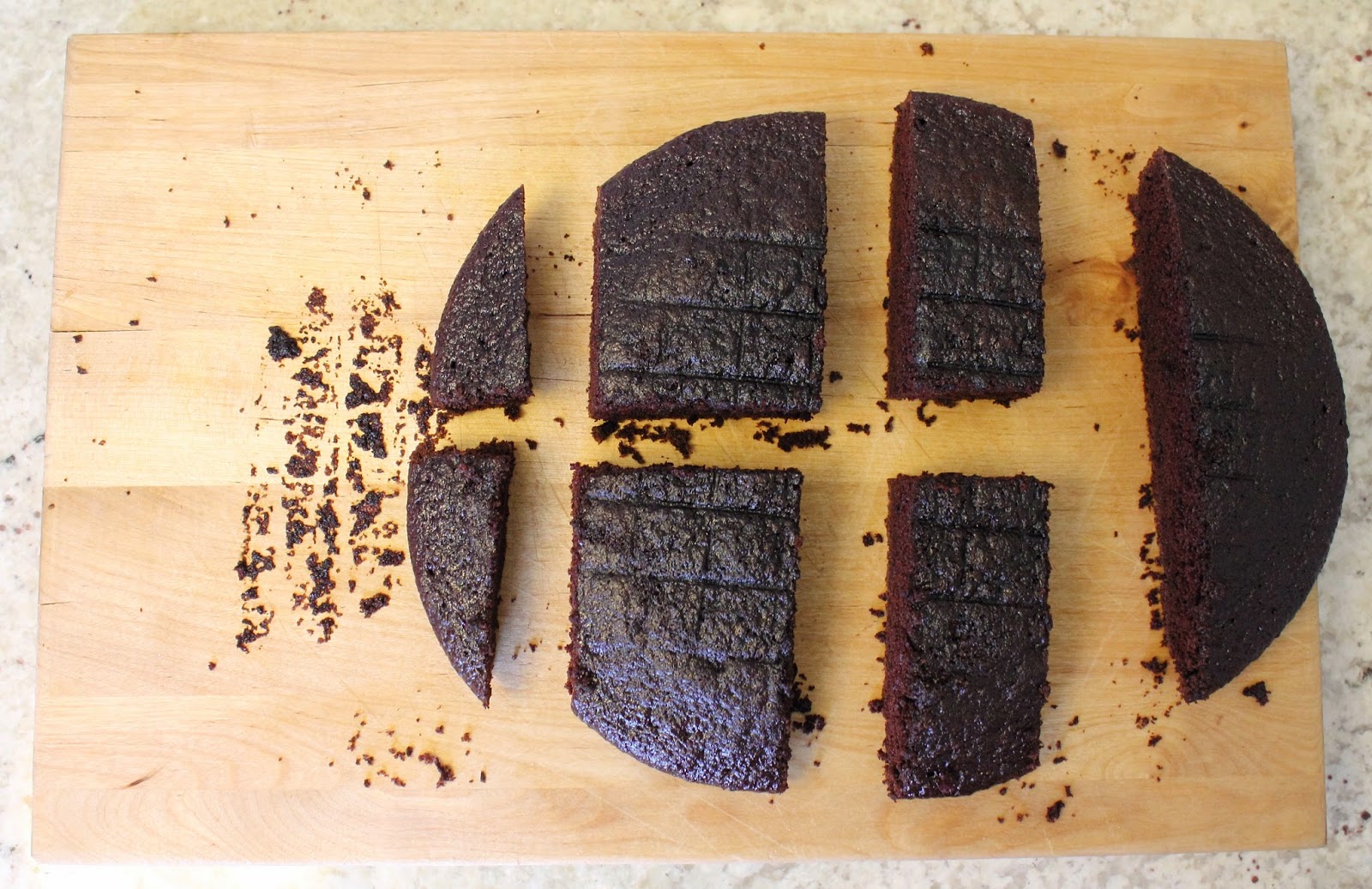 The largest pieces become the wings, the next become the tail and the smallest become the horizontal stabilizers.
{I would have called these the back wings because I know zilch about airplane anatomy but I looked it up for you, you're welcome.} 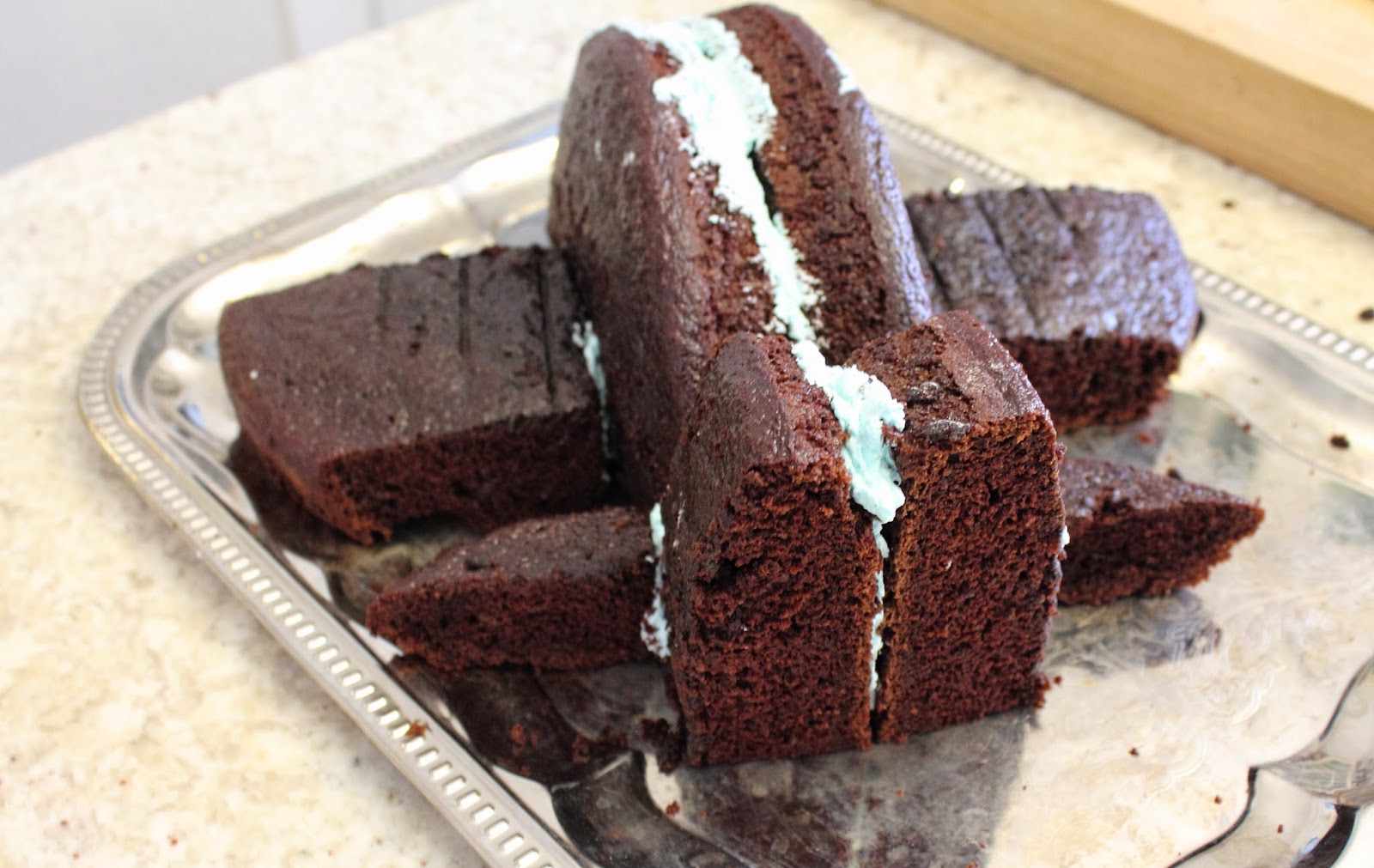 Slather icing {I used this buttercream recipe again} over the whole cake. 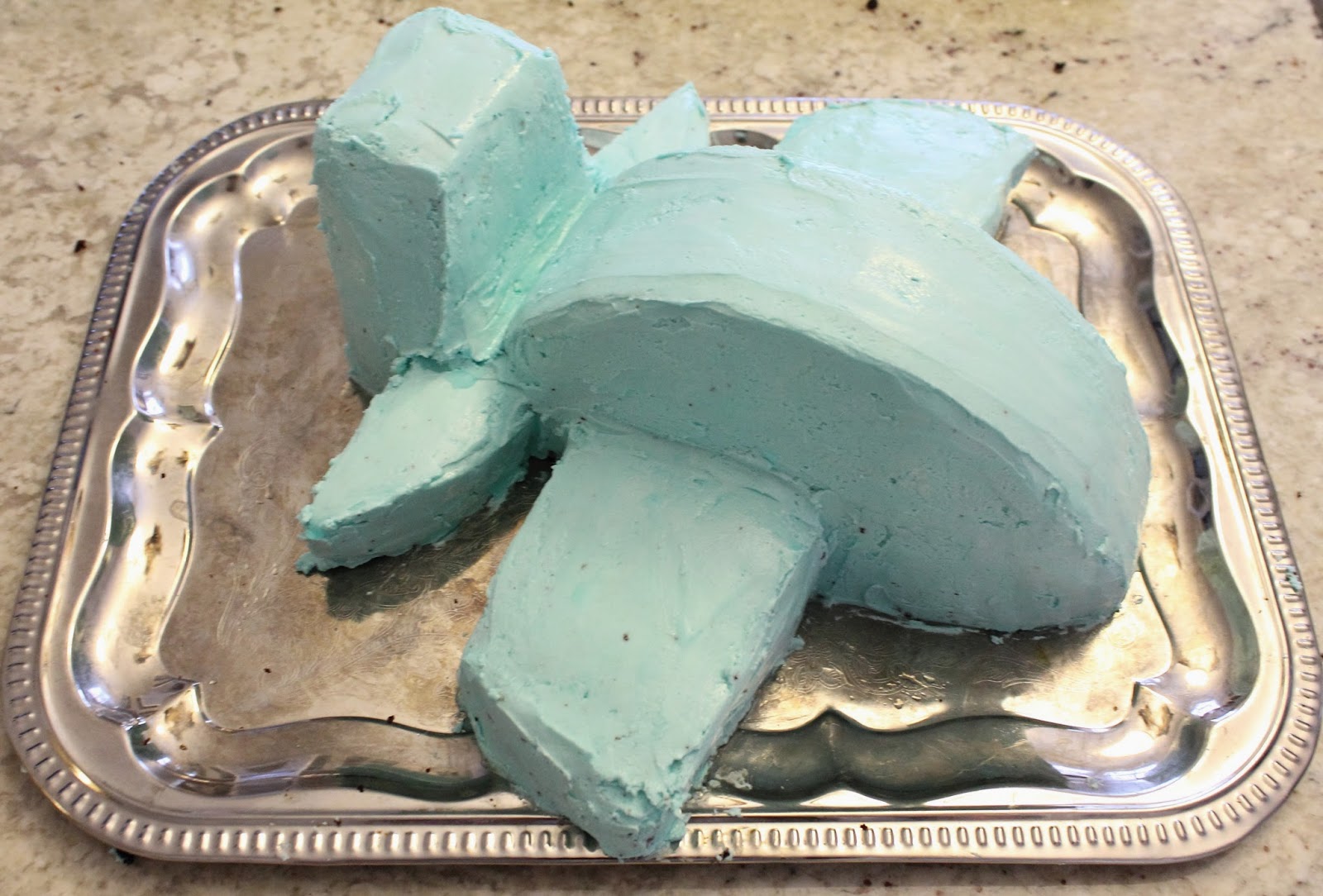 Then add whatever details you desire with a piping bag. 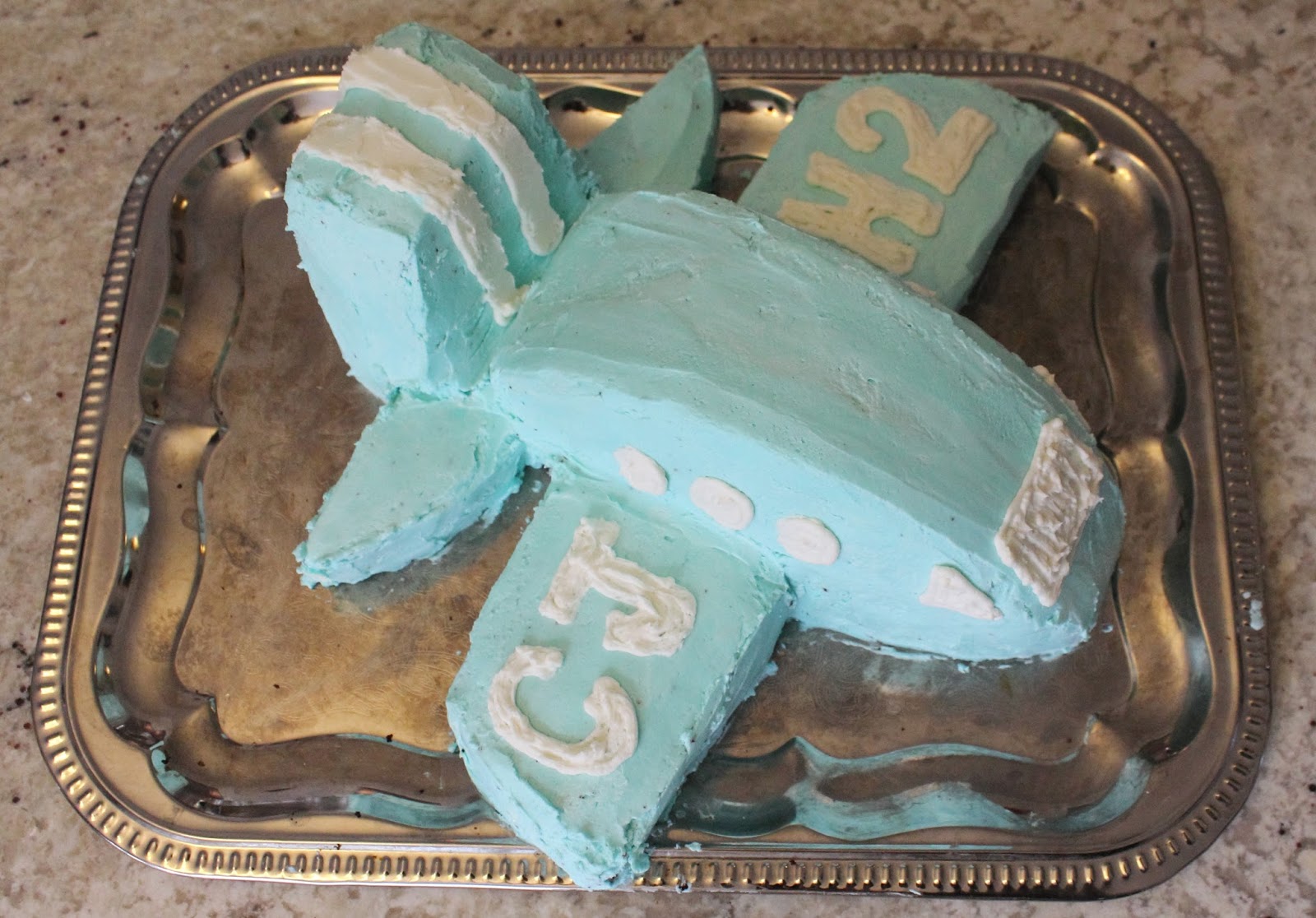 I had one decoration which involved a bag of white balloons, some twine to tie them all together and bringing these airplanes down from Ced's room.
Last minute party=one decoration. 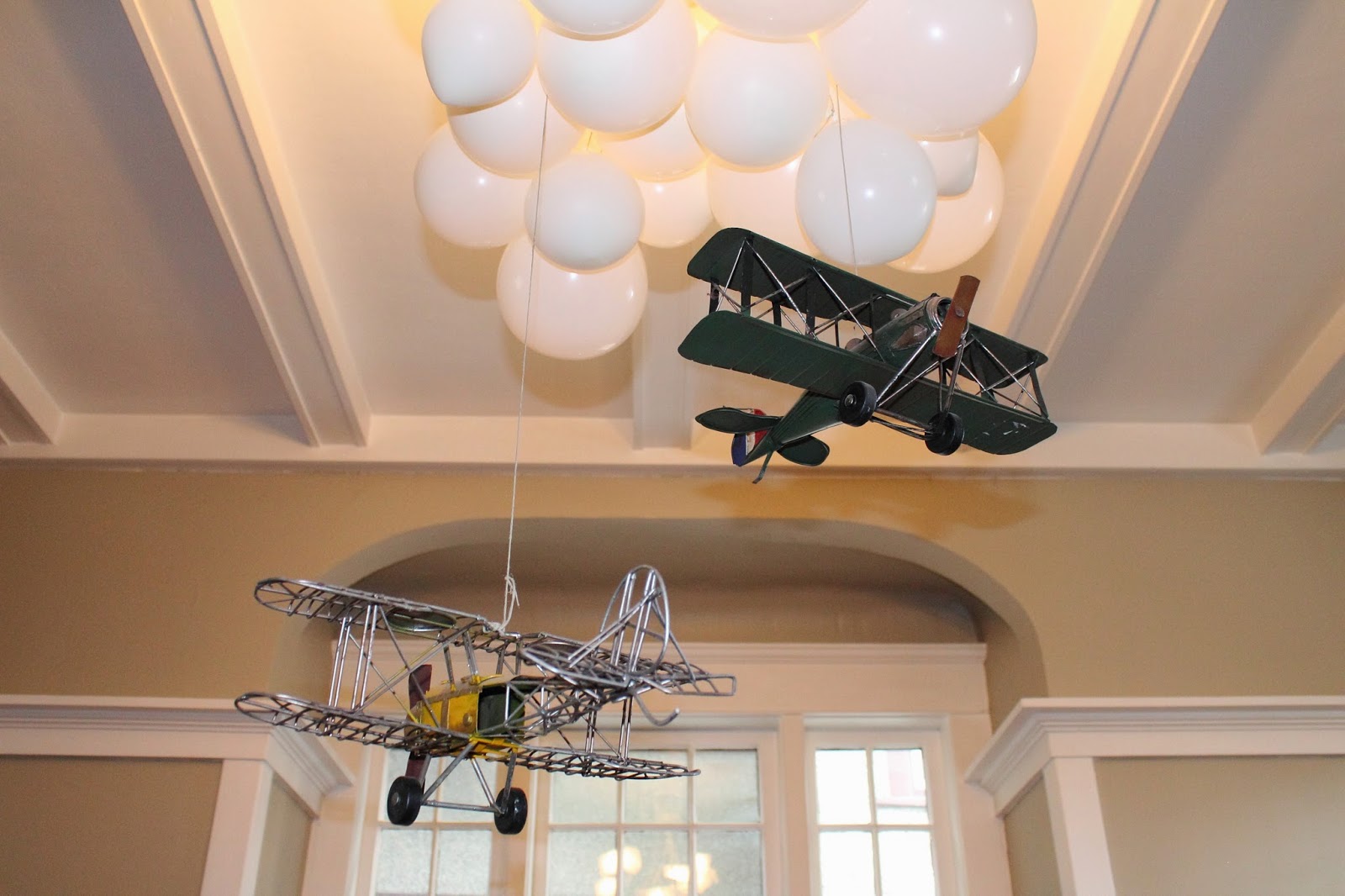 The best parts of any party of course are the guests.
Cedric, being the second child and so young, doesn't really have his own group of friends.
Fiona's neighbourhood friends, however, are so much fun and great buddies to Ced so they helped us celebrate. 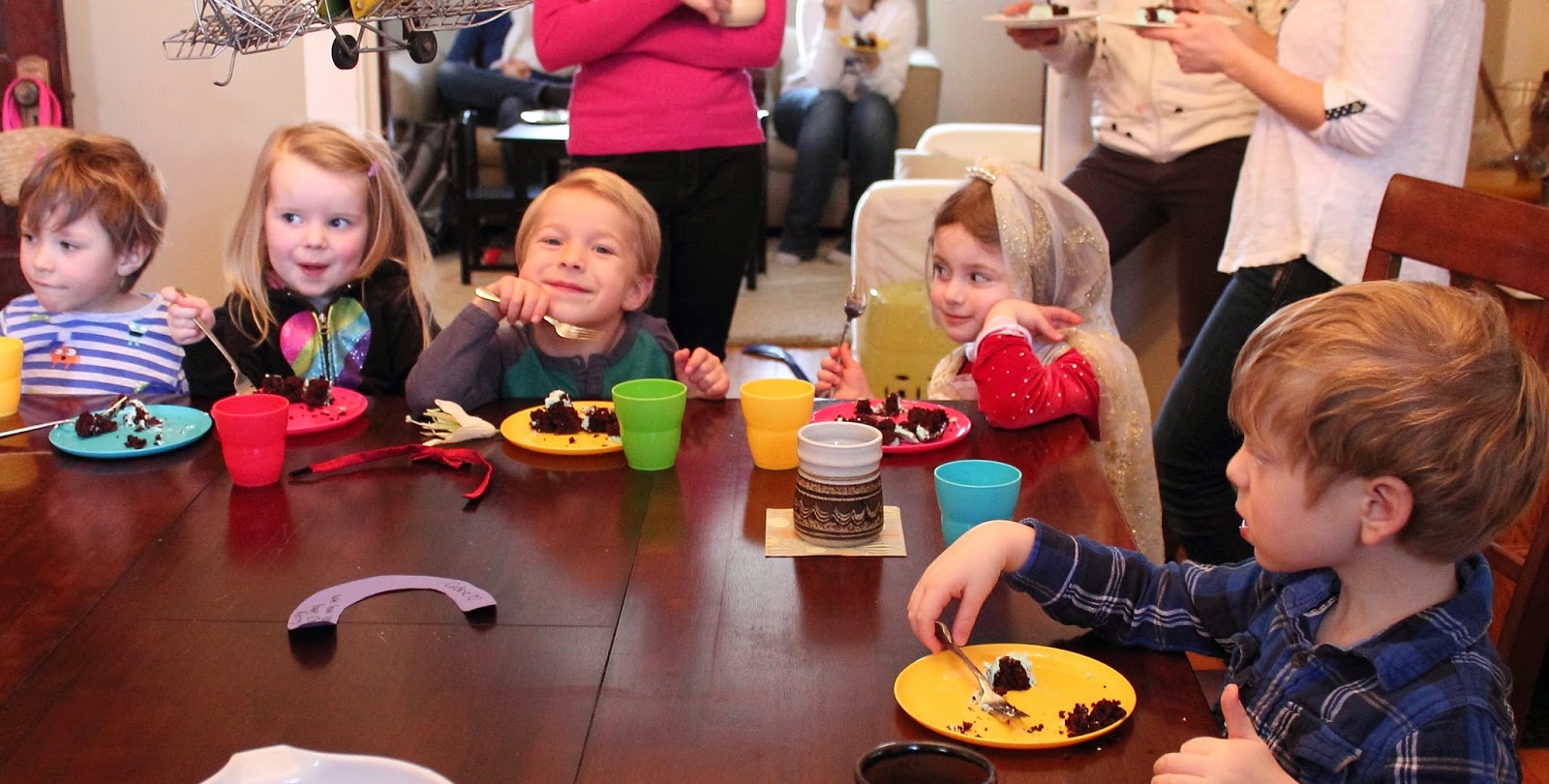 We even had my Aunt join us from Ontario via Facetime. 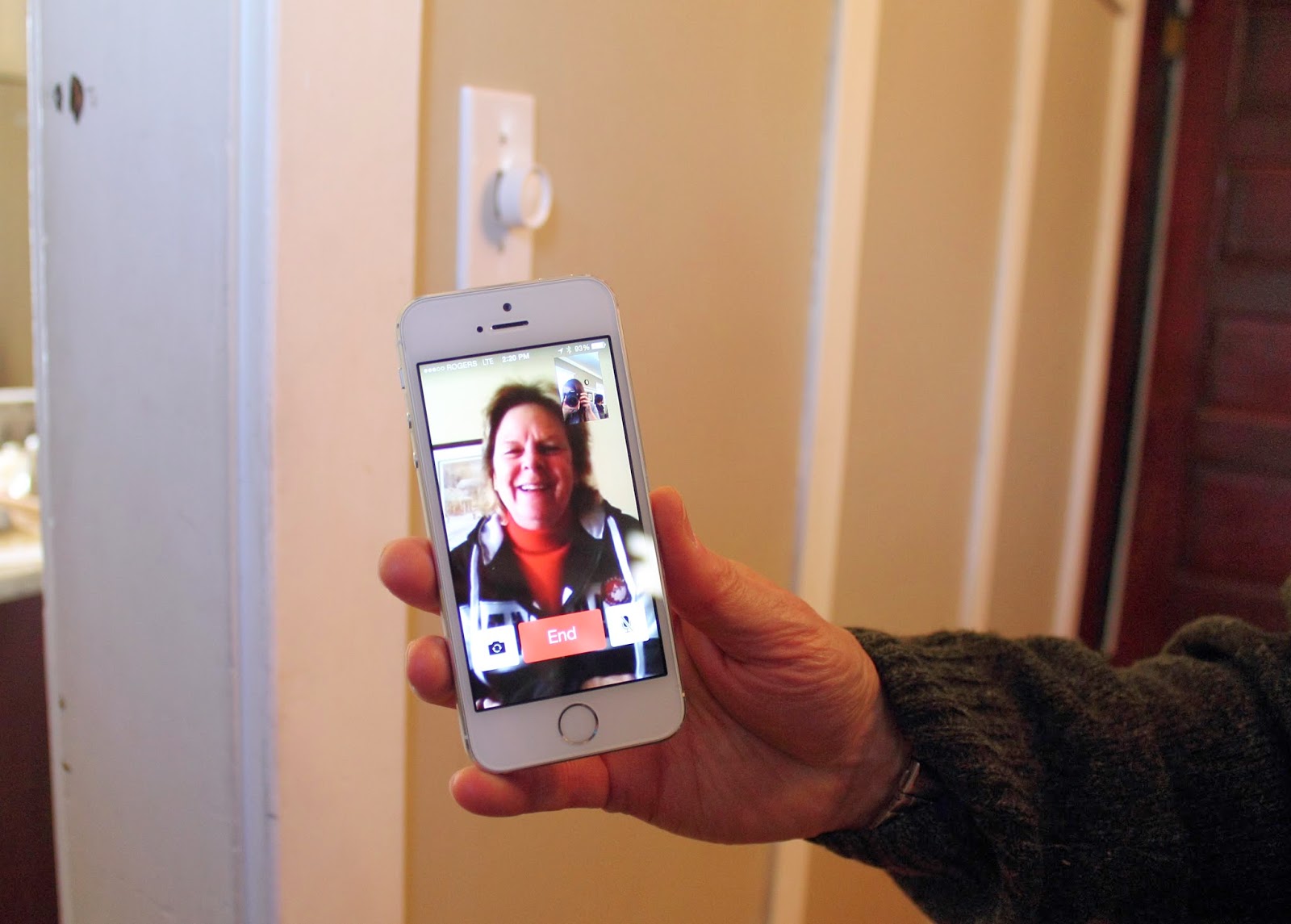 Birthday smooches from Diana for this guy, he was in heaven. 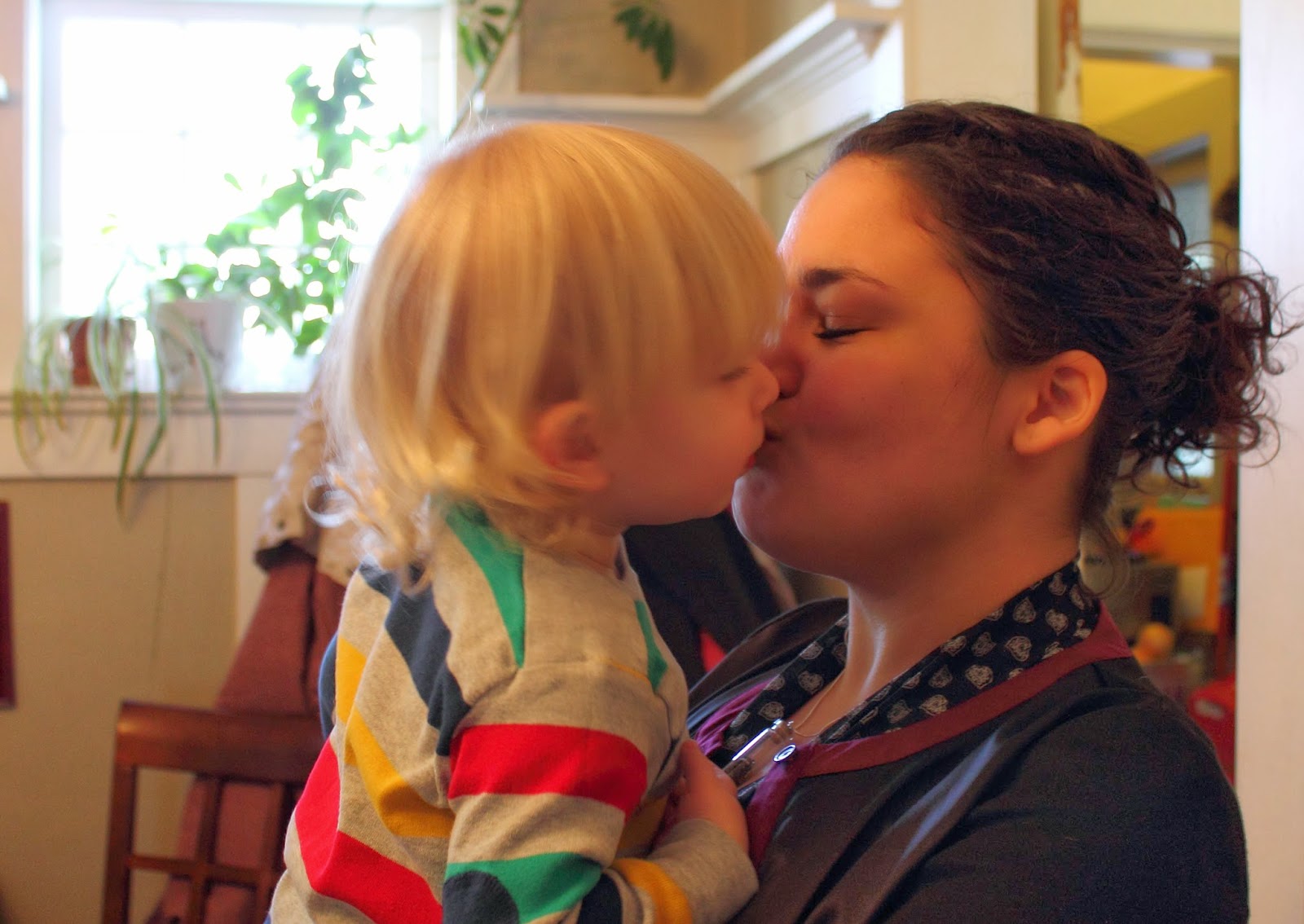 Cedric is so loved, we are so lucky to have such amazing people in our lives.
I think it will be upsetting for me when my kids' birthday parties are only for their friends and not my own as well.
Thanks to everyone who helped us celebrate the big 2!

Posted by cwesthicks at 4:00 PM