This is not a professional review, nor is it a sponsored post {getting paid to do this is still but a dream}.
This is my opinion based on our experience with Baby Led Weaning.
Now that that's out of the way, here's what I think.

Baby Led Weaning {aka the most natural child transition I've ever seen} is great.

I started offering Cedric purees {I use that word loosely} at just before 6 months.
It was canning season so I used some cooked fruit {before turning it to jam} and stewed tomatoes.
I also cooked and processed some peas, squash, sweet potato, carrots, broccoli, chicken, chick peas, lentils...you get the idea.
All good stuff, all fresh so really tasty.
Then just like I did with Fiona, I would heat it slightly in the oven {this is a no microwave house, I know} and attempt to spoon feed it to Cedric.

He was utterly uninterested and unimpressed.
I even let Fiona give it a go. 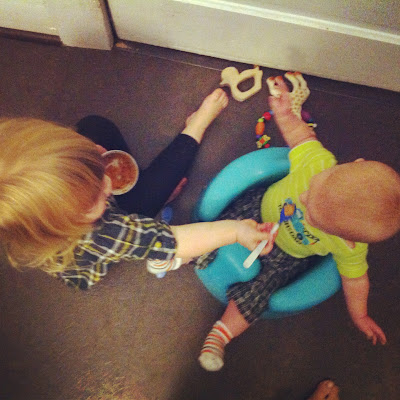 The crazy part was that he was so interested in food.
If I held him at the table he would be grabbing for my meal, my plate, my fork.
I knew he was ready to eat solids.

I had heard about Baby Led Weaning from some women in the Mom's group I joined after Fiona was born but hadn't ever looked further.
Feeding Fiona was a breeze.
She would have her mouth open before you could get more food on the spoon.
I mean, does this look like a baby that refuses food? 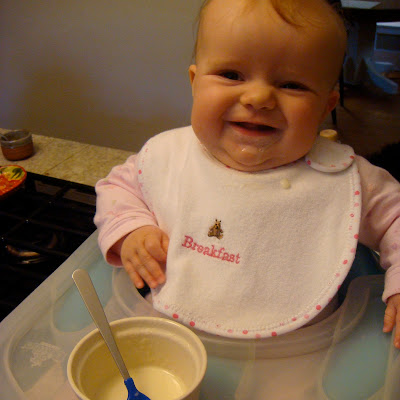 I thought it would be the same with Cedric.
Ha ha ha, sigh.
To think my two kids would do anything the same.
I laugh at my naivety.

Then, out of the blue my friend Irma Coumantarakis comes over with a copy of this book.
I'm not saying she endorses this method but she was intrigued and looking into it.
I opened it that same afternoon and was immediately hooked.
It was like I was reading what I already knew.
Initially I thought I would read the whole book and then give it a try.
I couldn't wait, I was fired up.
I was going to put this into action, now.
I made sure to read the section on anything they don't recommend.
{I, like most are, was concerned about choking.}
Then we did this. 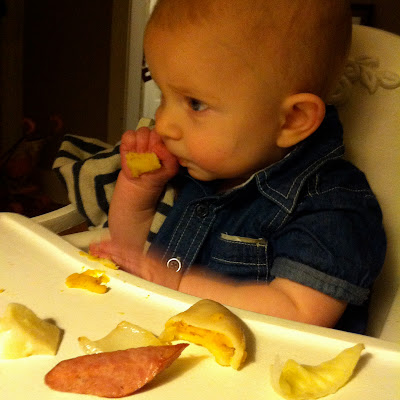 I gave Cedric a perogie {cut in half} a large piece of turkey sausage and a wedge of cooked cabbage.
That's it, put it in front of this then 8 month old and let him at it.
I couldn't believe the difference.
He actually ingested a good portion of it.
But the best part was how happy he was.
Don't even get me started on the fact that I ate my own meal {with both hands you guys}
And I had a conversation, a real dinner conversation {as real as it gets with a 2.5yo that is}.
The point is, we were ALL happier.

We have since had the same success with {from top left to right}.
Tofu Thai noodles
Turkey and avocado sandwich
Homemade Pizza {somewhat healthy I promise}
Cucumbers/snowpeas
Tacos {just gave him a full one slightly baked so it crunched easily}
Yoghurt
Beans and hotdogs
Oranges
And many many more that I didn't photograph.
In fact, I have not changed the way we eat and have not yet come across a problem meal.
Last night we have shrimp risotto and he was able to eat the rice easily. 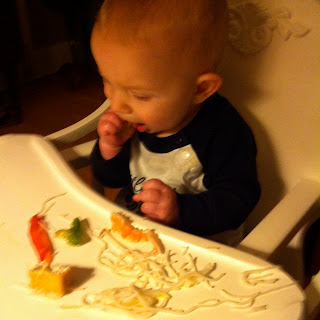 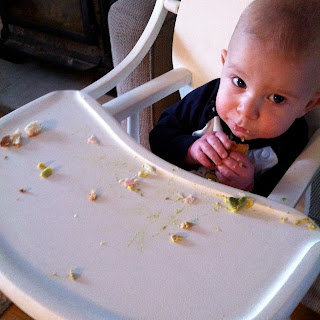 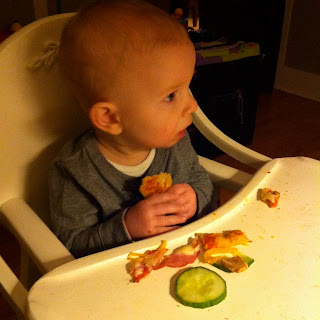 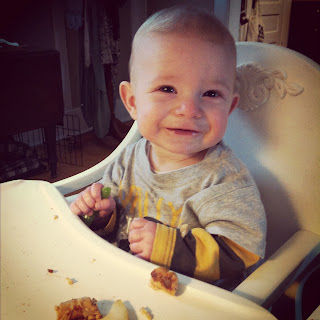 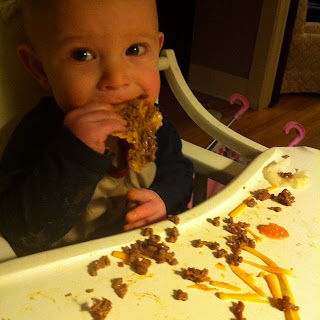 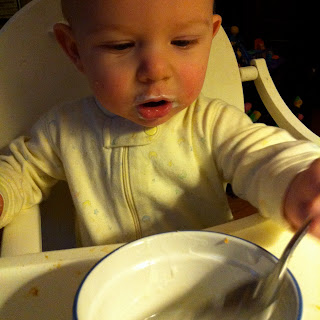 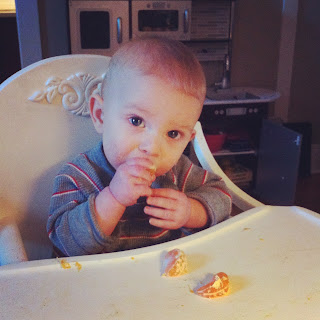 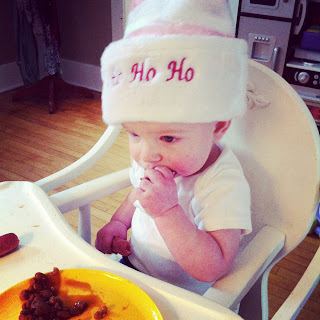 **It has always been my belief that following natural instincts is best.
My mantra for childbirth was "I trust my body, I trust my baby."
So why stop now?
That sentiment is repeated throughout this book.
Trusting that your baby is choosing to eat what he needs to is so important.
Of course you decide what to put in front of them so it's not like they'll be going for the cake and chips.
They wrote about a study in which they monitored multiple babies and what they chose to eat.
Some days they would eat only vegetables, some days only meat, some days almost nothing.
The outcome, however, showed that in the long run, they were choosing a balanced diet.
There is even evidence that if we let our children control what they are putting into their mouths from the beginning that they will be more willing to try new foods {aka less picky}.

As I said above I was concerned that Cedric would choke on the large pieces of food that are recommended.
In fact, the opposite is true.
He learnt very quickly how to "chew" {no teeth at the time so "gum" really} and manipulate food in his mouth.
The book also goes into other skills, such as dexterity, that they learn but I won't go into that.

The bottom line is that I was so impressed with my little guy.
I'm sure this isn't for everyone but I would do it again without thinking twice.
{No that was not a pregnancy announcement, 2 is good thanks.}

P.S.
One of my favourite lines from the book was in the FAQ section about cost.
{Because a lot of food ends up on the floor at first.}
My experience is that it still costs less than preparing separate food.
They also pointed out that if you have pets you can reduce the amount of pet food you buy because they will eat what's dropped.
At first I laughed at this but it has proven to be too true.
Our dogs have set up a permanent camp under Cedric's highchair.
Posted by Cheryl West-Hicks at 11:30 PM