I'm struggling to find the words that can sufficiently describe our current situation while keeping it clean.
We had planned a weekend of hard work at the lake to do all those projects I was talking about when the universe pooped (see, keeping it clean) all over us! 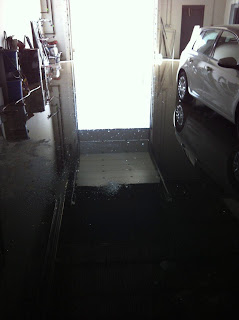 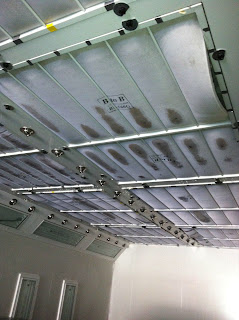 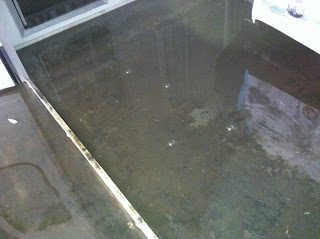 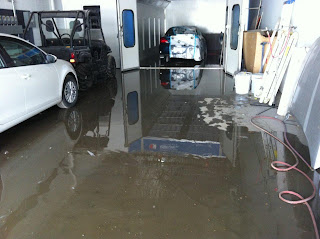 We were waiting at the checkout of a Barrhead Hardware store on Saturday when we got the call from Cecile that we'll never forget.
The booth was being filled with water!  It was seeping out the walls, into the walls, out of the light fixtures and all over Cecile's fresh paint job.
A sprinkler head was gushing water and no one knew how to turn it off.  Even all of the Firemen that would come with 4 firetrucks took a while to stop the madness.

HOW COULD THIS HAPPEN???  THIS DOESN'T HAPPEN!!!

You see, we had just had a company install sprinklers in our booth per fire code, they finished work on Friday.
Jeff was really nervous about it and asked the installer numerous times if they would stand up to the heat in the booth, stressing that we can't operate without this booth and it CAN NOT GET WET!
They assured us that it would be fine.  Really now?

Jeff dropped me and the kids off then got to the shop asap.
I have not seen Jeff that upset in a long time.
We were both feeling angry that this happened and on the weekend that Jeff had 14 cars lined up to be painted.   Our wonderful employees had agreed to work extra time to get these cars done and now that was not possible.
As I've said before, Jeff takes pride in making our customers happy.  I knew he felt that he was letting them down even though this was in no way his fault.

The anger quickly faded to sorrow.

We had been working so hard and things were going so well, I mean really well.  That all seemed swept away in an instant.
On Saturday night when Jeff got back he looked beaten up but being the amazing person he is says "it's bad but on the positive side everybody is safe".
He is now more worried about how we're going to pay our employees than keeping ourselves afloat, he truly is an amazing man.
This is going to be a tough recovery but we know we'll be ok because we always are.